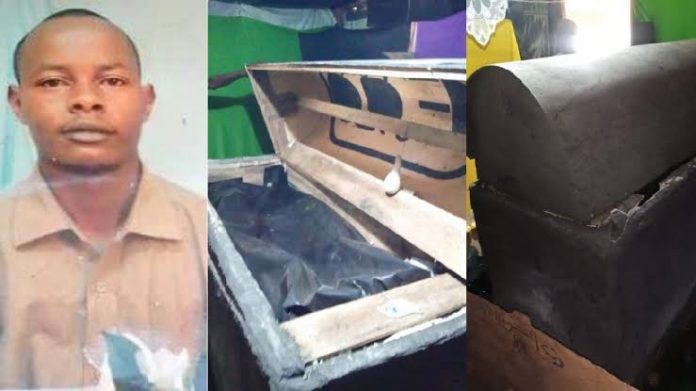 The body of Joseph Gathogo, a Kenyan teacher who reportedly went missing on December 22, 2022, has been found in an unexpected place.

The body was found buried in a concrete coffin inside his home in Ihururu village, Nyeri County, Kenya.

The lifeless body of 45-year-old Joseph Gathogo, a teacher at Muhoya Secondary School, was retrieved by police from the rental house at Ihururu Shopping Centre on Thursday, January 12, 2023.

The teacher is believed to have placed himself inside a coffin he reportedly made after which he ingested an identified poison.

A bouquet of flowers, a black flag and scrolls written in weird writings, and a cow horn had been placed near the boat-like structure.

The body of Joseph Gathogo Njambi, 45, was discovered by his landlord in single-roomed house laid in a concrete coffin covered in plywood and a black flag.

According to his landlord Kariuki Njama, Gathogo, who had been his tenant for 19 years, was last seen on December 19, 2022.

“We last saw Gathogo on December 19, last month, his phone was off. I thought he had gone home for Christmas break until his mother came looking for him on January 1,” he noted.

Njama reported the case of his missing tenant to the Ihururu police post when they still could not trace him.

As days went on he became suspicious of the tenant’s house after fellow tenants spoke about a foul smell coming out of Gathogo’s house and immediately reported the matter to the police.

“The police came and after breaking into the house they found a concrete coffin with the deceased decomposing body. There was also an assortment of chemicals.

Hundreds of curious residents milled the area to catch glimpse of the home-made coffin. The smell of the unknown poison which he had swallowed was evident.

“The coffin was made of concrete but covered with plywood, there was a black flag with mysterious drawings and unreadable writings. I have never witnessed such a thing in my life, it’s very shocking,” Njama said.

Villagers described Gathogo as very reserved, with no friends visiting his home, but dedicated to his work..

“He loved politics and was a peaceful person in the 19 years he has been my tenant I have never seen any visitors or friends to his house. He used to meet his colleagues at Ihururu shopping center,” he said.

The landlord noted that Gathogo did not go to church and had no girlfriends that he knew of and mostly kept to himself.

Njama recalled it was not the first time that he had gone missing.

“There was a time he went missing for two weeks during Covid-19 pandemic and switched off his phone. The school reported him missing but Gathogo was found in the house unharmed,” he said.

Mr Zachary Muthiri, a colleague and friend, said he was a jovial person and a hardworking teacher’s assistant never quick to anger, and loved politics.

“At one point he was the patron of Catholic Action, a catholic movement at Muhoya  Secondary School but he later dropped his duty,”Muthiri said.

Muthiri said he was shocked by the death of his friend saying he maybe associated with a certain cult.

“The coffin made of concrete took him maybe two years to construct. He had several chemicals to preserve his body and control the smell?” Muthiri said.

Confirming the incident, Tetu subcounty police boss Phillip Mwania said that relatives of the deceased had noticed that he was missing for one week and decided to check him in his house.

“Accompanied by police the relatives visited his house but we’re met by foul smell and a a closed door ,on breaking they were atonished that their kin was dead inside his homemade coffin,” said Mwania.

He said that the relatives told police officers that Gathogo who appeared disturbed had been visiting their home at Ngangarithi village but all of sudden he had stopped, prompting the search.

“His relatives told us that prior to his death he had his own issues but they never though he would take his own life we are investigating to establish more details,” said Mwania.

His body was taken to Nyeri County Referral Hospital morgue as DCI officers processed the scene.