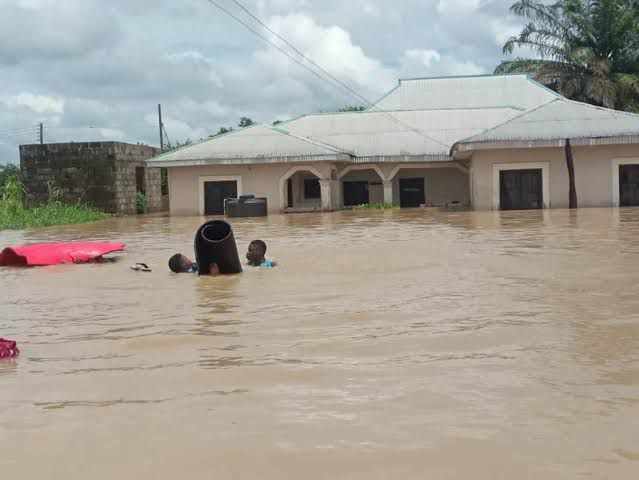 Residents of some Bayelsa State communities affected by the rampaging flood have called on the state government to find a lasting solution to the menace.

They also appealed to the government to provide temporary shelters and relief materials as the flood has already sacked them from their homes.

The flood disaster has been escalating as the rainy season reached its peak, particularly since the beginning of October, ravaging communities and settlements in the state which is on the fringe of the Atlantic Ocean.

Last month, in anticipation of the rise in water level, the state government directed public and private schools to proceed on what it called ‘flood break’ to protect pupils and students from the disaster.

Already, some places such as Biseni, Tombia-Ekpetiama, the Tombia-Amassoma Road, Akenfa, Akenpai, Igbogene, Swali and towns such as Kaiama, Odi, Otuoke, Ogbia communities are facing the menace with rivers and tributaries such as the River Nun and the Epie Creek full to the brim.

A victim, who identified herself as Perez Ayebanua said the flood waters, which came to their houses late last month are already taking a toll on inhabitants with reptiles also competing with them for space.

Also speaking, Florence Job and Ebi Perekeme explained that while those who have the resources have left their homes for hotels or other homes elsewhere, those of them that are not financially strong are stranded.

The residents complained that they are frustrated over the situation, calling on the Bayelsa and Federal Governments to come to their aid as they suffer the impact of the catastrophe.

It was gathered on Tuesday that a section of the East-West road, which connects the South-South, South-East to Lagos and other parts of the country, had been affected by the flood, with Adagbabiri in Bayelsa and Patani in Delta, both boundary communities in the two states, worse hit.

Checks also show that the Mbiama Bridge along the East-West Road that connects many Engenne communities in Rivers State to Bayelsa, is also being threatened by the rampaging flood waters from the river underneath, which is full to the brim.

On Saturday, the Bayelsa State Task Force On Flood Mitigation and Management had visited some communities to carry out an on-the-spot assessment of the impact and promised the victims succour.