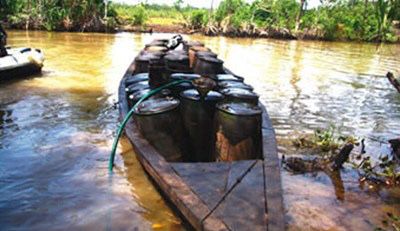 Prominent Ijaw leader and a First Republic Federal Commissioner for Information, Chief Edwin Clark, disputed on Tuesday the claims by the Nigerian National Petroleum Company Limited that oil bunkering began 20 years ago, insisting that the illegality had been ongoing for more than five decades.

Clark made the observations during a press conference held in Abuja titled, “A Call for Judicial Inquiry into the Criminal Act of Oil Theft Now Sabotaging Our National Economy.”

While advising the Federal Government to institute a judicial inquiry to investigate oil theft, he blamed government cartels and appealed that jobs should be provided for unemployed youths.

“Investigation into this matter must be full, open and comprehensive if there is sincerity to unravel what is going on,” he said.

This was as he suggested that modular refineries should be built to replace the illegal refineries being currently operated, which not only negatively affect the economy of the country but also have devastating effects on the Niger Delta environment.

“I am therefore using this opportunity to again appeal to my fellow Nigerians who have taken over the ownership and management of the oil industries in the Niger Delta, the NNPCL in particular, to employ our youths in the various departments of the oil industries and not make them beggars in their own homes.”

Commending the private security company behind the discovery, he added, “I also want to use this medium to commend Chief Government Ekpemupolo (Tompolo), and his company, Tantita Securities Limited, for this huge discovery and exposure of such criminal acts against the state. It demonstrated that awarding him the surveillance contract was not a mistake.”

The elder statesman was reacting to the recent discovery of large-scale and sophisticated oil theft machinery going on in the deep swamps at Yokri, close to the Forcados terminal.

According to reports, high-powered technological engineering expertise is applied to steal crude oil from the Forcados line and transport it through a four-kilometre pipeline to a platform in the sea, which belongs to the NNPCL and its partners.

The report also stated that as much as 200 barrels of crude oil were being stolen from there every day and that this has been going on since 2014.