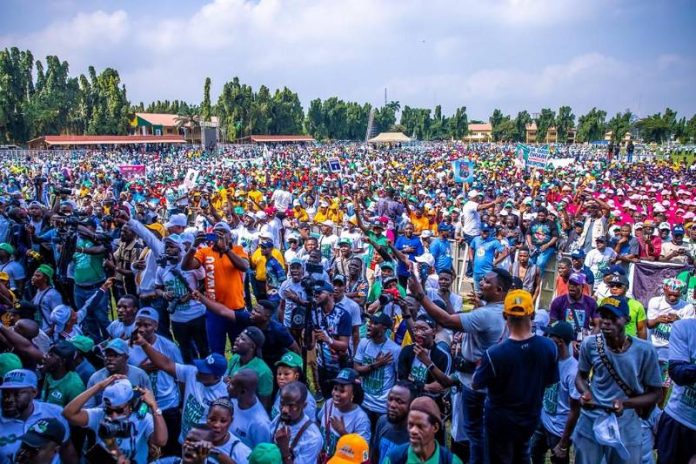 The carnival-like public walk, occasioned by intermittent rainfall, with men of Nigeria Police, Lagos State Command, providing security protection, led to terrible gridlock in the axis as motorists and other road users had to make use of alternative routes to their various destinations.

Participants at the rally sang solidarity songs for Tinubu/Shettima and Sanwo-Olu/Hamzat’s re-election, spotting White, Yellow, Orage  T-Shirts, bearing, “Vote for Tinubu/Shettima Presidency, Sanwo-Olu, Hamzat re-election in Lagos, as they walked along the highway, saying, “Awa Lokan, Tinubu Lokan for President,” amid exchanged of banters with passers-by, and motorists

The youths were subsequently, addressed at the Ikeja Police College, as various musicians entertained the crowd to the admiration of all.

According to various speakers, Tinubu, remained the only competent, qualified candidate to rescue Nigeria and lead it out of the present socio-economic challenges confronting it.

According to one of participants of the rally, who simply identified himself as Anthony Nwosu, “We Ndigbo, are here to lend our support for Asiwaju/Shettima presidency and Sanwo-Olu in Lagos.”

Meanwhile, Chairman of the Lagos State chapter of APC, Pastor, Cornelius Ojelabi, acknowledged and hailed the youths in Lagos for their massive turn out at the rally in support of Tinubu and Sanwo-Olu, governorship candidate towards the forthcoming general elections.

Ojelabi, in a statement by state’s APC Publicity Secretary, Seye Oladejo, stressed that the success of the rally was a clear statement and demonstration of the preference of the party’s teeming youths as regards the choices before them.

The statement read in part: “It underscores a clear understanding of the manifesto of our presidential candidate which is essentially a commitment to youth development, empowerment and a guarantee of a bright future under a progressive government.

“The support for Sanwo-olu /Hamzat is a vote of confidence in a promising second term as a result of a highly successful first term of office.

“It’s note-worthy that the youths mobilized human and material resources towards the success of the rally to harness their collective strength towards a great cause.

“We also equally appreciate the contributions of the womenfolk, artisans, market men and women and other stakeholders towards our common lofty goals.

“We urge all and sundry to remain undaunted as we count down to elections that all permutations point to our victory.”