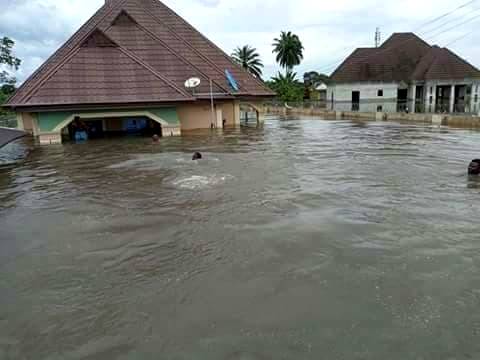 The declaration was made in Birnin Kebbi on Saturday by a cleric, Imam Fuad Adeyemi at a one-day capacity-strengthening workshop for imams and Islamic scholars on the need to join in the anti-corruption crusade.

Adeyemi said if most states affected by the floods had deployed the “Ecological Fund’’ allocated to them regularly by the Federal Government to address environmental concerns, the effect would have been minimised.

He expressed regret that it had become evident that the Ecological Fund had not been put to judicious use in most of the states.

Adeyemi reassure, however, that Nigeria remained “the best country created on earth by Almighty God’’.

The cleric, the National Imam of Al-Habibiyyah Islamic Society, also challenged Imams and leaders of the Islamic faith to ensure that they did not depend on others to make their livelihoods.

He stressed that they must endeavour to be self-sustaining as dependence on others could entice them into corruption.

He added that it was only when they could fend for themselves that they would be able to preach against corruption without fear or favour and only with the fear of God in their hearts.

He noted that an imam who did not have other visible means of livelihood might not be able to preach the truth to congregations.

It was reported that the capacity-building, organised by the Al-Habibiyyah Islamic Society for Imams and Islamic scholars drawn from Kebbi was supported by the MacAuthur Foundation.

It was also reported that the programme was meant to encourage lawful lifestyles by the imams and their followers and to enable religious leaders to stand on their feet.

Adeyemi also stressed the need for imams and Islamic scholars to convey the message of Almighty God diligently, hence the need for them not to rely on others for a living.

He encouraged participants to take advantage of businesses around them, including agriculture, trading, traditional vocations and modern skills among others to improve their lives.

He enjoined the imams to form cooperative societies to be able to benefit from policies and programmes of governments and non-governmental organisations.

Delivering a paper entitled: “Wealth Creation for Islamic Scholars’’, Malam Nura Abdullahi-Attahiru, Managing Director of a rice mill in Sokoto, observed that Islamic scholars are supposed to lead their followers in all aspects of life.

While demonstrating how to convert one naira to millions of naira, Abdullahi-Attahiru encouraged participants to develop multiple sources of income to be able to stay afloat on turbulent waters.

He charged them to develop self-confidence and self-competence to cross over huddles that might be barrier to their successes.

Participants told the News Agency of Nigeria (NAN) that they were elated and learnt a lot at the capacity-building.

Many assured that they would make judicious use of knowledge acquired to improve on their livelihoods and pledged to extend the messages conveyed to their followers.

Imam Abubakar Yusuf-Giro, an imam in Birnin Kebbi described the training as apt, timely and encouraging.

He noted that imams had benefitted in similar programmes conducted by the Al-Habibiyyah Islamic Society in the recent past and that they impacted positively in the lives of beneficiaries.

“We must appreciate them society for what it had been doing because it regularly reawakened us on what we already knew and educated us on what we didn’t know all with a view to make us self-reliant,’’ he said.

They appealed to Al-Habibiyyah not to relent in its efforts at creating awareness in religious scholars.