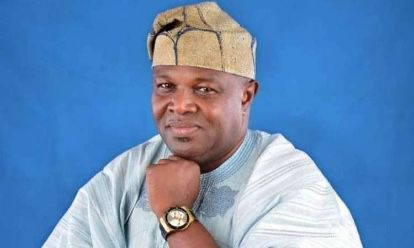 The Senator representing Ondo South senatorial district, Nicholas Tofowomo, is clamouring for quick dispensation of justice in a suit he instituted against a former deputy Governor of the state, Agboola Ajayi.

Tofowomo expressed worry over failure of the Federal High Court to deliver judgment in a pre-election case he filed at the Court in Akure.

Tofowomo had gone to court seeking the disqualification of Agboola Ajayi as the 2023 Candidate of the People’s Democratic Party (PDP) in the district.

The former deputy governor defeated the senator with 78 to 74 votes, at the last PDP senatorial primary in Okitipupa in May, 2022.

Dissatisfied with the outcome of the primary, Tofowomo approached the court to challenge the academic qualifications of the PDP senatorial candidate.

Apart from Ajayi, who is the first defendant, the PDP and the INEC were also joined as the second and third defendants respectively in the suit number, FHC/CS/AK/ 83 /2022 and filed on Tuesday July 5, 2022, by the plaintiff’s lawyer, Mr Femi Emodamori.

he Senator claimed that Ajayi did not meet the constitutional requirements for contesting the 2023 general election as contained in the interpretation and application of Section 66(1)(i) of the Constitution of the Federal Republic of Nigeria, 1999 (as amended) and Section 29(5) & (6) of the Electoral Act, 2022 as well as other relevant laws.

The Court had concluded hearing in the case and parties adopted their written addresses for judgment since August, 2022.

In a reminder letter dated 12th October, 2022 and addressed to the Station Registrar of the Federal High Court, Akure Judicial Division, the Senator’s Lawyer, Mr Femi Emodamori, said the court had not communicated parties for judgment date despite the fact that it has till 19th of this month under the Constitution to deliver its verdict.

“The Suit is a Pre-Election matter relating to the candidacy of the People’s Democratic Party for Ondo South Senatorial District.

“It was commenced by Originating Summons, and parties adopted their respective written addresses at the hearing of the case on 19th July, 2022, after his Lordship, Hon. Justice R. M Aikawa tentatively adjourned the case till 30th August, 2022 for judgment.

“However, up until now, no date has been communicated to the parties for the judgment. By virtue of Section 294 of the Constitution of the Federal Republic of Nigeria, 1999 (as amended), every court is expected to deliver its judgment in writing not later than ninety days after the conclusion of evidence and final addresses by the parties.

“The ninety days period in the instant case would expire on or about 19th October, 2022.

“Apart from the above constitutional provision and the understandably huge public interest in the case, it is most desirable for all the parties to know the outcome of the case promptly, for them to effectively prepare and execute their political campaign plans for the Ondo South Senatorial District.

“Consequently, we hereby respectfully request that you kindly bring this letter to the attention of his Noble Lordship, Hon. Justice R.M Aikawa, for necessary action.”