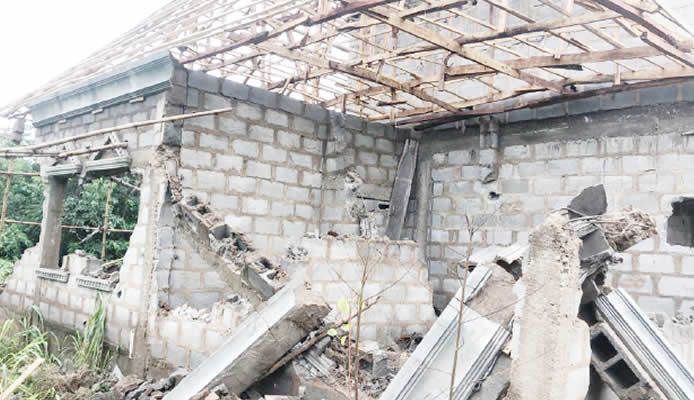 Trouble is brewing in the Olokuta area of Abeokuta South, Ogun State, following an alleged plan by the Abeokuta Grammar School Old Students Association to take over land belonging to residents of the community.

The residents of Graceland Estate in the Olokuta community alleged that some members of the alumni association invaded their community in the early hours of Monday to destroy a new building worth N30m.

They also accused the group of demolishing a perimeter fence worth N1.5m.

It was gathered that crisis started when the old students went into the community to mark houses for demolition and asked residents on the estate to vacate their homes over an allegation that they encroached on some land belonging to the school.

The association was also said to have dragged the residents to court, accusing them of erecting structures illegally on their land.

The owner of the demolished house, Wale Soaga, insisted that members of the association demolished his building.

Shoaga, who claimed to have left the building late on Sunday evening, said the school’s alumni had been dragging the land with him since he started the construction.

He said, “I started the roofing last week Thursday. The carpenter finished on Sunday. When I got here on Monday morning, I saw massive destruction; they destroyed all the building. The whole house is worth over N30m, and everything has been destroyed.

“I suspect members of the Abeokuta Grammar School Old Students Association. I remember when I was constructing the house sometime last year December, one of them came with some thugs. He told me that all the houses in the estate would be destroyed and they would collect the land from us. I have reported to the police. I want them to be prosecuted.”

The Publicity Secretary of Graceland Estate, David Ogunsanya, said most residents bought their land from a prominent Egba chief, Ade Oyalowo, and were given documents to back their purchase.

He said despite presenting documents of payment to the school, the alumni insisted the land belonged to them.

He explained that the state bureau of lands had also intervened in the dispute, declaring that a portion of the land belonged to the school, while the other portion belonged to residents.

When contacted, the President-General of AGSOBA Global, Sunday Oduntan, described the allegation as unfounded and untrue.

He said, “The land was bought by our forefathers. It was bought in plots and we have all the receipts. In 1967, we did the survey of all the land and we have the documents.

“Even though people of Graceland Estate are illegal occupants on our school land, they are not our enemies. We only wanted to claim what our forefathers bought for us.

“We are presently in court and the association is confident that the judgment will be in our favour.

“We can never destroy their property because when we win in court, technically we will become the owner of everything on the land, and that is an advantage to us.

“The people of Graceland Estate have issues within themselves; they are still fighting over ownership among themselves, but this demolition has nothing to do with us. I can never approve of any destruction like this.”

The Ogun State Police Public Relations Officer, Abimbola Oyeyemi, promised to get back to our correspondent.

He had yet to do so as of the time of filing this report.