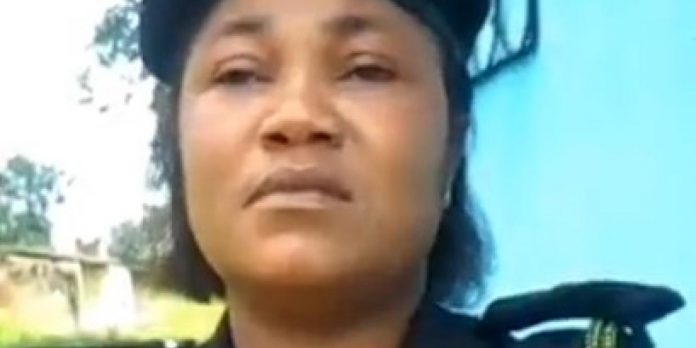 A police woman identified as Inspector Olorunsogo Bamidele, serving at the Nigeria Police Force, Osun State command, and attached to the Ode-Omu Divisional headquarters, has cried out for justice after she was allegedly physically assaulted and brutalised by her senior colleague, ASP Ajayi Mathew.

In a video making the rounds on the internet, where Inspector Bamidele appeared with cuts and bruises all over her body with her torn police uniform, she accused the senior colleague, ASP Matthew of sexual harassment.

Amid tears in the video, the policewoman narrated her ordeal in the incident that happened on Tuesday, adding that ASP Mathew, also the Divisional Crime Officer, had been making love advances at her but she refused as she told him that she was married and could not engage in any love affair with him.

According to her, rather than letting her be, he has been using his position to intimidate and harass, blackmail and threaten to sack her if she refuses to accept his love advance.
Inspector Bamidele said, “He started beating me, to the extent that he naked (sic) me. Look at my chest, my hands, everywhere injured. Mr. Ajayi Mathew.”

When asked why the senior colleague assaulted her, she said, “I don’t know because he asked me out, that I should befriend him, I said no, I’m a married woman, I cannot befriend you. He started blackmailing me; saying he is the one befriending me, which is not true.

“My right hand was there. Two Constables and 10 civilians; after doing that, he went inside and carried a dane gun and said he wanted to gun me down. The civilians had to take me out of the office and said I should run away but I said no. If he wants to kill me, he should kill me.

“Help me. Assist me. Ajayi wants to kill me. Ode-Omu Division.”

The Nigeria Police Force authorities have yet to officially react to the video which exposes the moral decadence and corruption which had infiltrated the force in recent years.