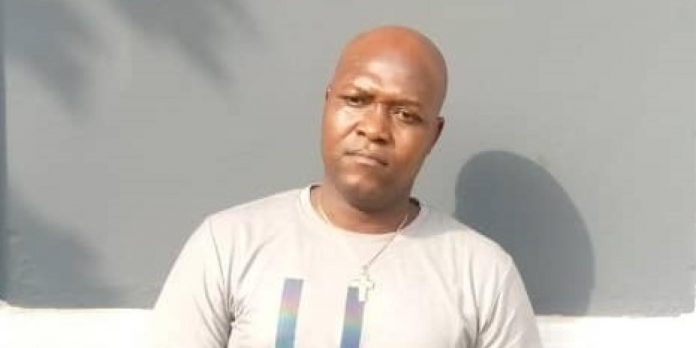 Mr. Emmanuel Okorie, a Lagos-based trader languishing in prison since April, has said he was framed.

Okorie hails from Ebonyi but owns a shop at Ikotun Market in Lagos where he sells rice and beans.

But currently, Okorie is in Warri Prison in Delta State where he was transferred on May 25 from Federal Correctional Centre, Sapele where he was first remanded by the Chief Magistrate, (Special Grade) Magistrate Court, Effurun, E. A. Odjugo on April 25, 2022.

Okorie in his cry for help and justice accused an Investigating Police Officer (IPO) attached to Ebrumede Police station in the Warri area of the Delta State, Inspector Beauty Orode, of framing him up to suffer for a crime he knows nothing about.

SaharaReporters gathered that Okorie, who is the accused in the State Vs. Emmanuel Okorie case with charge number EHC/38c/2022 at the High Court of Justice of the Effurun Criminal Division in Delta State under Justice M.N. Obi, was charged with two counts of obtaining goods under false pretence and conspiring with others now at large, with intent to defraud, and falsely obtain goods under false pretence from one Mrs Queen Emanerame, otherwise known as Madam Queen.

The IPO, Inspector Orode, in a statement under oath, dated October 4, 2022, filed before the registry of the Federal High Court sitting in Effurun, alleged that “Mr. Emmanuel Okorie on/about March 25, 2022, at about 1900hours, a complaint of obtaining goods under false pretence was reported by one Queen Emanerame with her sales girl, one Ogbuji Angela, against him.”

The statement added, “The defendant paid a cash sum of N500,000.00 and N21,000.00 for rice and haulage respectively into the complainant’s Zenith Bank account and requested that the 270 bags of Mango rice be delivered at St. Jude Catholic church, GRA Effurun where the balance sum of N7,060,000.00 will be paid with a cheque. The 270 bags of Mango rice were accordingly delivered at St. Jude’s Catholic Church, GRA, Effurun.

“That while in the premises of St. Jude Catholic Church, GRA Effurun, the defendant told the sales girl who followed them for the delivery of the rice that the person that is to sign the cheque is not readily available.

“That when the defendant and his cohorts noticed that the sales girl, Ogbuji Angela had left the church for their shop, they immediately went to Agofure Motor Park where they had paid the sum of N250,000.00 for a truck the previous day i.e. the 24th day of March, 2022 and conveyed the bags of rice to Lagos.

“That the defendant filled a waybill form with his name and telephone No. 08034137057 and market address.”

SaharaReporters gathered that Mrs Emanerame claimed she issued an invoice/waybill dated March 25, 2022, with No. 9948 to Mr. Okorie to enable the rice to be transported to St. Jude Catholic Church, GRA, Effurun.

Meanwhile, it was gathered that Mrs Emanerame claimed that it was Mr. Okorie’s colleague who identified himself as Rev. John, who went to make a payment of N521,000 and took delivery of the rice at St. Jude Catholic Church.

She said on March 28, 2022, after she did not get any alert for the remaining amount of money, she went to the church with her sales girl, Angela and met with the Secretary of St. Jude Catholic Church, Mrs Gift Ezims and Reverend Father, John Mark Ikeke, who told them that a man had come to receive the rice at the church.

According to them, the man who received the rice told the church that it was his colleague whose brother lived in the United States of America that instructed them to buy the rice for distribution to orphanages through the Catholic parishes.

It was gathered that the said Rev. Fr. John Mark Ikeke told Mrs Emanerame in confidence that the man personally bought and donated 30 bags of rice to St. Jude Catholic Church and the man then ordered an Agofure Parcel Vehicle to convey the remaining 240 bags from the church premises to Agofure Parcel office along PTI Road, Effurun for onward delivery to Lagos.

However, checks by SaharaReporters revealed that whereas Agofure Parcel Service Waybill document with number WA001028286 stated the date of shipment as March 24, 2022, the date on the stamp on the document showed April 25, 2022, which shows a contradiction.

Also, while the shipment document showed Emmanuel Okorie at Ikotun Market, Lagos State as the receiver of the goods, there was no detailed information about the sender as the spaces for the sender’s details were not filled, and the quantity of rice stated to be delivered was one (1) bag weighing 50kg.

But a representative of Agofure Parcel Service, Miss Rachael Efebe, in a statement made to the police said the parcel service conveyed the rice (without stating the quantity) from St. Jude Catholic Church, GRA, Effurun to Lagos on March 24, 2022.

But Mr. Okorie has insisted that all the claims were a frame-up and that the said ‘Rev. John’ who paid the sum of N521,000.00 into Mrs Emanerame’s Zenith Bank account is not him but may be the same as ‘Rev. Fr. John Mark Ikeke’ whom the complainant and her sales girl met at St. Jude Catholic Church.

Mr. Okorie also argued that the same ‘Rev. Fr. John Mark Ikeke’ who admitted knowing about the man who received the rice at St. Jude Catholic Church on March 25, 2022, and 30 bags from the 270 bags supplied, could also be responsible for the transportation of the 240 bags of rice to Agofure Parcel service along PTI Road in Effurun.

Mr. Okorie asked why the police left the cleric and instead, arrested him in his shop in Lagos and charged him for a transaction he knows nothing about.

In his statement before the police, Mr. Okorie maintained that he is innocent of the crime he is being accused of, stating that on/about April 11, 2022, at about 1300 hours (1 pm), he was in his store at Ikotun, Lagos where he sells rice and beans when some men told him he was under arrest. He said one of them handcuffed him.

According to him, it was at that point that he started shouting that he was being kidnapped as the men were not in police uniforms.

He said some people rushed to the scene to rescue him and started beating the men. He later realised the men were police officers and they subsequently took him to Ikotun Police Station.

He said that though he trades on rice, he does not deal in ”Mango rice’, the type of rice allegedly stolen from Mrs Emanerame’s shop in Delta State.

He also denied paying the sum of N521,000 into Mrs Emanerame’s Zenith Bank Account as alleged.

But the Chief State Counsel, U. M. Erijoh (Mrs), who is the prosecuting state counsel filed a fresh charge before Justice M. N. Obi of High Court 3 in Effurun.

When the matter came up for hearing on October 10, 2022, two lawyers, D. O. Bayagbon Esq and Bar. Aremu filed bail applications on behalf of Mr. Okorie but Justice M. N. Obi of High Court 3, Effurun adjourned the case to November 11, 2022, in order for the lawyers to consolidate the two bail applications as one.

However, SaharaReporters gathered that neither the secretary of St. Jude Catholic Church, Mrs Ezims nor Reverend Father John Mark Ikeke was arrested or charged for acting as an accomplice to the crime despite admitting to receiving part of the alleged stolen rice.

SaharaReporters called two phone numbers said to belong to Mrs Emanerame but while one was answered by a man who identified himself as a fashion designer and said it was a wrong number, the second phone line did not connect.

According to him, Okorie is being accused wrongly.

“Emmanuel Okorie is a foodstuff seller in Ikotun Market, Lagos. One day I got a call that some people wanted to kidnap him. It was in the form of kidnapping because they did not identify themselves as policemen. It was later that they brought out their ID cards.

“They accused him of buying stolen rice but the quantity of rice they mentioned was not offloaded in the market.

“In the union, we have an offloading unit and every good that enters the market is being monitored. There was no way such a quantity of rice they mentioned entered that market. They said it was Mango rice, but that Mango rice did not enter the market. If they offloaded that kind of rice, we the union would have known.

“Moreover, he never bought that kind of quantity of rice since he started business in the market. They are accusing him wrongly. Also, Emmanuel was never and he is not presently a Reverend Father and he only has that shop he is staying in Ikotun market. He doesn’t have any other shop anywhere, and he stays alone. He doesn’t even have an apprentice.

“He did not travel anywhere within that period. Even the goods we buy from Maiduguri, none of us goes to Maiduguri. We only send money to Maiduguri; they would buy and do a waybill for us. Nobody in Ikotun Market travels to buy any goods.

“I know very well that Emmanuel Okorie cannot buy stolen goods because if we are offloading goods, once those offloading make a mistake and maybe give him excess, he would call them back and say that his goods are in excess and they would take the excess goods back to the rightful owner.

“How can somebody who has been doing something like that buy stolen goods? Each time they give him excess goods, he returns them back. I know him and I know that he is not a thief and that he is not doing any dubious business because I am the present chairman of the Foodstuff Association, so I know him as somebody that does genuine business.”