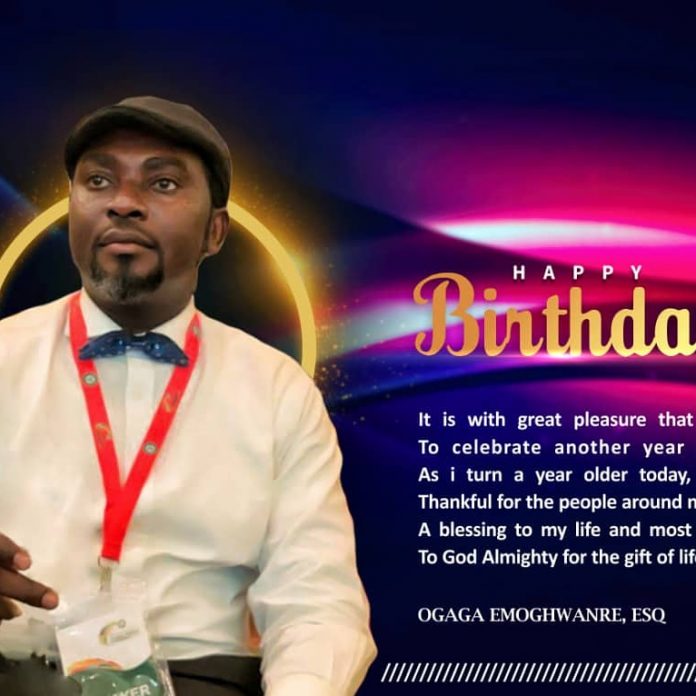 It was celebrations galore as the NBA SPIDEL LOC and the Leadership of the NBA Welfare Committee treated the Publicity Secretary of the Benin Branch of the NBA, Ogaga Emoghwanre, Esq to a surprise party to mark his birthday at the SPIDEL Party/Cocktail.

The mouth piece of the Lion Bar was seen grinning from ear to ear after being treated to a pleasant surprise by the group of gentlemen comprising Mr. Yakubu C. Maikyau, SAN; Mr. Emeka Ozoani, SAN; Mr. Yinka Esan, Chairman Ibadan branch; Mr. Mohammed Adelodun and Mr. Yakubu Bawa who deemed it fit to express the love and respect they have for the celebrant.

What started as a low key birthday anniversary for the celebrant attending the SPIDEL Conference in Ibadan later snowballed into an arena for a show of immense love as he was invited from his hotel room and taken to the Aare Afe Babalola Bar Center where the SPIDEL Party/Cocktail was taking place. He was then treated to a memorable outing to mark his birthday. A beautiful birthday cake was also presented and cut by the celebrant amidst cheers.

The celebrant who is also a Special Assistant to the NBA President and Secretary, NBA Welfare Committee was overwhelmed with the gesture of love. He then offered words of appreciation, as well as prayers for the organizers of the surprise birthday outing.

“I must confess that I am overwhelmed with the love and well wishes from everybody.
I want to on this note express my deepest gratitude to the members of the NBA SPIDEL LOC, NBA Welfare committee, led by Mr. Yakubu Maikyau and to everyone who has celebrated with me and added bright colours to my day, making it a memorable one. I say a big thank you to Mr. President, Mr. Olumide Akpata my Boss and pray that we will have more joyful moments together”.

Other dignitaries and principal officers of the Bar present were:

The Celebrant who is a renowned bar man expressed profound gratitude to these distinguished personalities for the massive show of love.

WHAT MANNER OF A NATION? Premium Session at Uyo SLP Confab Ponders Ways to Reform a Dysfunctional Polity