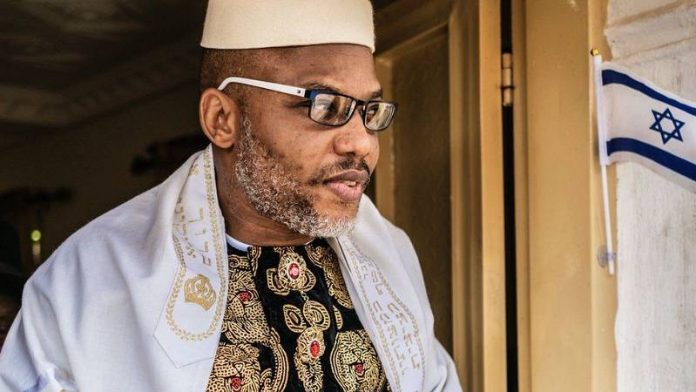 The leader of the Indigenous People of Biafra, Nnamdi Kanu, who is battling to secure his freedom, is seriously contemplating overhauling his legal team following his dissatisfaction with factions contending to represent him and the group.

Close sources confirmed that several persons have emerged to lay claim to be representing the legal interest of the IPoB leader and the secession group in recent months, leading to the emergence of many factions competing against themselves but

But a source close to Kanu said last night that the IPoB leader was worried over the emergence of many individuals and groups all claiming to be pursuing the legal interest of the group at a time the image of the group and leadership was waning.

Finding reveals that there are no fewer than three main legal factions fighting for the soul of IPoB and Kanu even though he actually prefers and recognizes the team headed by a senior lawyer and activist given his revered position in the profession and the respect that he commands among peers in the bar and the bench.

The senior lawyer is believed to have done a credible job that has secured some wins for the leader and the group but some of the lawyers, who see themselves as the ‘mainstream Biafran lawyers’ are said to be miffed that they have been ‘left out’ of the opportunity to make quick gains.

Some of the powerful leaders of the group are said to be subtly rooting for two of its members, who are also lawyers but do not command considerable weight, respect and goodwill in the Nigerian legal circles and abroad as the one preferred by the IPoB leader.

However, it was learnt that some of the IPoB community members in the South East, where the two lawyers hail from, want the duo to be at the forefront of Kanu’s legal matters because of their seeming popularity in the South East and IPoB circles.

But a third legal front said to be largely operating offshore, is believed to be vehemently opposed to their South East counterparts leading the charge, claiming that they should be allowed to manage the legal fireworks for Kanu, having been at the forefront of his defence before others were brought in to take over their work.

“What this means is that there is serious infighting among the legal teams and the leader is seriously worried to the point of accusing some of these people of working for pecuniary interest and not IPoP and he is contemplating firing some of those lawyers,” a competent source said.

“Some of these people are fighting for superiority, fame and money and not that they can do the job better than what has been done while others are merely using IPoB name and Kanu to fleece people who have been donating towards his cause,” a close source lamented.

As a result of the infighting among the various legal entities, Kanu is said to be considering overhauling the teams but it was not clear how soon he would do that and who would make the preferred team and who would be dropped in the final analysis.

Kanu, who was freed by the Appeal Court a few weeks ago, has been dragged before the Supreme Court by the Federal Government, which claims that his case touches on national security and that he has many issues to contend with beyond the case of rendition, for which the court freed him.

The Attorney General of the Federation and Minister of Justice, Abubakar Malami, told the media that Kanu has many cases to respond to and clear his name before he can be allowed to walk free.