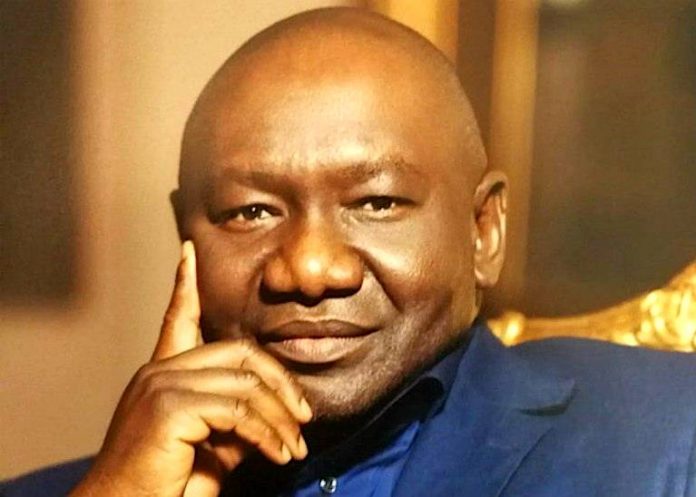 A High Court of the Federal Capital Territory, has quashed all allegations bothering on corruption, bribery and money laundering, brought against AITEO boss and international Billionaire businessman, Benedict Peters by the British and Nigerian agencies, arising from his ownership of a number of properties.

The court consequently awarded the sum of N200m damages jointly and severally against the Economic and Financial Crimes Commission, EFCC, the Attorney General of the Federation, Abubakar Malami, SAN, and 5 others, in favour of Mr Benedict Peters and the three companies.

The case (Suit No FCT/HC/CV/0536/17), was filed on behalf of the Plaintiffs by Chief Mike Ozekhome, SAN, Chief Emeka Ozoani, SAN, Chief Andrew Oru, Chief Nobis Elendu, Esq, and a crack team of other lawyers, on 11th May, 2017; with an amended Statement of Claim filed on 31st January, 2019. Suleiman Jibrin, represented the EFCC and 6 others; while Farouk Abdullah led others to represent the AGF.

The court, in awarding the sum of N200m damages against the Defendants in the Tort Of Carousel Fraud,” argued by Chief Mike Ozekhome, SAN (leading Emeka Ozoani, SAN and the other eminent lawyers), strongly condemned the action of the Defendants, which by “fraudulent design, suppressed and misrepresented facts in supposition that the Claimants’ properties legitimately acquired belonged to Mrs Deziani Alison Madueke, former Minister of Petroleum Resources.”

It condemned the “deceitful sham allegations by the Defendants”; and held that “the unlawful means of conspiracy of the Defendants was to extract by intimidation, coercion, the assets, properties and monies to which the claimants are legitimately entitled.”

The Claimants had in the suit claimed against the defendants, the sum of $5b USD (equivalent of N1.5 trillion at the then exchange rate of 315 to one US Dollar), for the tort of carousel fraud. In the judgment, the court deprecated the defendants’ actions in fraudulently misrepresenting and facts in support of their false claims that the properties belonging to the Plaintiffs (Benedict Peters, Collinwood Ltd, Rosewood Investments Ltd and & Walworth Properties Ltd), which had been legitimately acquired, belonged to Mrs Deziani Alison Madueke, and were thus allegedly unlawfully acquired.

In his ruling, Justice Olukayode Adeniyi held that the EFCC founded its case mainly on an undated and unsigned document that bore no name of its alleged maker, titled, “Highly Confidential Attorney Work”, allegedly issued by one Donald Chidi Amangbo.

He held that failure by the Plaintiffs to call the said Amangbo (the alleged maker of the document) for possible cross-examination, rendered the totality of the purported report incredible, unreliable and of no probative value to be relied upon by the court, more so as the purported report was undated, unsigned and had no name of the alleged maker.

The court in agreeing totally with Ozekhome’s submissions, further held that: “It is hereby declared that the Defendants, by fraudulent design,suppressed and misrepresented facts in supposition that the Claimants’ properties…. legitimately acquired, belonged to Mrs Deziani Alison Madueke, former Minister of Petroleum in Nigeria, and/or were unlawfully acquired, a fact they knew or ought to know were false, incorrect and baseless, constitute the tort of carousel fraud.

“It is hereby further declared that the predominant purpose of the deceitful sham allegations by the Defendants that the Assets/properties… belonged to persons other than the Claimants was directly intended (albeit to inflict economic loss on the Claimants just as much as it was to unlawfully profit the Defendants).

“It is hereby further declared that the unlawful means of conspiracy of the Defendants was to extract by intimidation, coercion, the assets, properties and monies to which the Claimants are legitimately entitled.

“The Defendants, their operatives, officers, agents, servants in whatever manner and howsoever called, are hereby jointly or severally restrained from interfering with the proprietary rights and/or interests of the Claimants, their agents, alter-ego or privies in relation to the properties listed in this suit.

“The Defendants either by themselves jointly/severally, their operatives, officers, investigators, servants, agents, associates and howsoever called, are hereby restrained from interfering/continued interference with the person of the 1st Claimant, either by way of arrest, criminal indictment, charge, interdiction, extradition, or in any other manner infringing on his personal liberty and freedom of movement on the facts and circumstances of this case, especially in the face of subsisting judgments of various courts on the issue.

“The sum of N200,000,000 (two hundred million naira) only is hereby awarded as general damages, jointly in favour of the Claimants against the Defendants, jointly and severally, for the unlawful interference, economic loss, loss of corporate goodwill from creditors, expropriation of personal assets and proprietary rights of the Claimants.”

Condemning the action of the defendants, the court further held that from the evidence led on the record and materials placed at the disposal of the court, it was safe to hold that the claimants have firmly established proprietary ownership of the four properties to which the instant action relates.