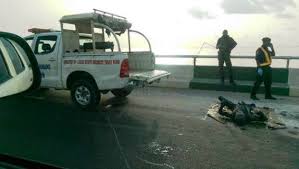 Serious chaos has been recorded close to the Third Mainland Bridge in Lagos State.

There was chaos at Ilubinrin inward Simpson near the Third Mainland Bridge in Lagos State, southwest Nigeria after a hit-and-run motorist reportedly injured a policeman.

It was reported that the incident caused traffic congestion on the bridge on Thursday. Pictures of the policeman posted on its official Twitter handle by the Lagos State Traffic Management Authority (LASTMA) show the bruises on the right hand and face of the bloodied policeman.

“Report of a hit and run at Ilubinrin inward Simpson, this has led to a serious traffic backlog towards third mainland bridge.

“LASAMBUS has been informed for immediate intervention. More updates shortly.”

Reacting to the alleged attack, the Lagos State Police Command spokesperson, SP Benjamin Hundeyin, condemned the attack on the policeman regardless of the provocation.

Reacting to the pictures posted by LASTMA, Hundeyin said, “35 mins and just 7 retweets.

“Flip this, let it be a police van involved in hit and run and watch the retweets increase exponentially.

“Same way the many daily good deeds of the police are shunned, giving the false impression it’s all about negativity and mediocrity.”