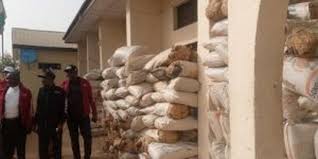 The NDLEA state Commander, Mr Ibrahim Braji, made this known at a news conference in Kaduna on Wednesday.

Braji said that the suspects were arrested on the evening of January 3, at Tasu Mahuta community on Refinery Road, Chikun Local Government Area of the state.

He said that the four suspects were two females and two males.

According to him, the bags of Indian hemp are weighing 3,576kg.

He, however, said the operatives were still investigating the matter to unravel other suspects for arrest and prosecution.

He further said the command had expanded its operational structure in the state to curtail the influx and outflow of drugs.

The state commander said that in the new area commands established in Samaru Zaria and Sanga Local Government Areas, patrol units had been deployed due to the linkage to other areas with many states.

Braji further said that as the 2023 general election was approaching, the command would carry out an enlightenment campaign to sensitise the youth to the dangers of drug abuse and its negative impact on society.

“The sensitisation will be at schools,  religious bodies, traditional institutions and vulnerable places,” he said.

The NDLEA commander added that youths should not allow politicians to use them as tools of destruction to society.