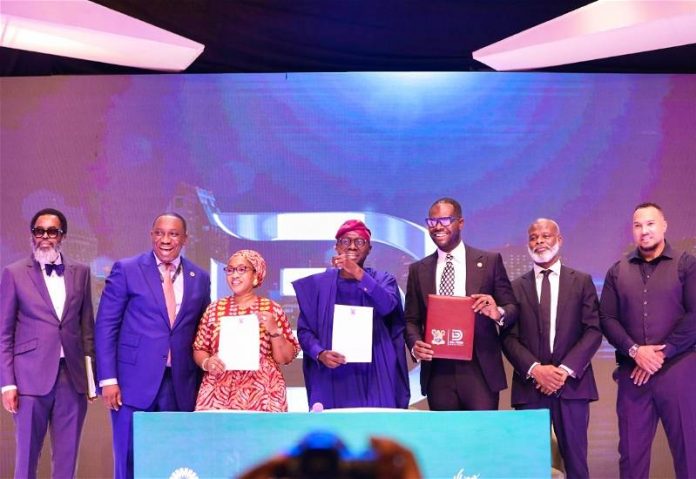 In a major climax of Lagos State’s Ehingbeti Investment Summit, Del York International Group and The Lagos State Government signed a monumental agreement to transform the face of the creative industry on the continent of Africa.

This segment of the event was especially dedicated to the formal signing ceremony of the Memorandum of understanding for the development of an ultra-modern Film and Media City in Epe between the two parties; a major game-changer project on the African continent, one that promises to position the State as a central hub for the entertainment industry in Africa. The Chairman of Del-York International Group, Mr. Linus Idahosa, signed on behalf of his group and the commissioner for Tourism, Pharm. Mrs. Uzamat Akinbile-Yusuf signed on behalf of the Lagos State Government in the presence of Lagos State Governor H.E. Babajide Sanwo-Olu.

Speaking at the signing ceremony, Mr. Governor spoke of his excitement at the prospect of the impending investment into the State as he recounted the recent history of the project and the fact that the signing was the culmination of 18 months of diligent effort by the Del-York team and members of the Lagos State Government.

According to the Governor: “I would like to thank the Del York Team for all their great work so far. I recall my last visit to the United States; they took us on a tour of the Trilith Studios in Atlanta to see first-hand what they wanted to build in Lagos and subsequently to an investment summit in Washington D.C, to meet with investors for the project. We want to give Nigerians who are creatives an opportunity to develop themselves to world-class stands and an ecosystem where they can learn, work and thrive in a serene atmosphere. I believe this project will achieve that to the benefit of all Lagosians. I thank all the traditional rulers in Epe for being such good hosts for the project and look forward to its positive impact on their community in Epe upon its completion.”

The Lagos Film and Media City, set to be built on 100 hectares of land in Ejirin city in Epe, Lagos, is envisioned as a sanctuary for leisure, entertainment, and learning, where all film and creative industry professionals can live, work, learn and play in a peaceful and conducive environment. This destination would encompass best-in-class facilities intermingled with appurtenances that support a modern sustainable city; multiple sound stages, a technology park, a School of Creative Arts & Entrepreneurship, a theme park, residential and commercial real estate, a Nollywood Walk of Fame, and front & backlot infrastructure for varied film environments are just some of the features that are promised on this significant development that will no doubt put Lagos on the global creative industry map.

Since its inception in 2010, the Del York Creative Academy, the capacity-building subsidiary of the Del York International Group, has laid a solid foundation for developing young people in the creative industry, training no less than 5,000 individuals from across Africa. In that time, they have facilitated the entry of world-renowned trainers from Hollywood to develop a stream of raw talent who has since blossomed into some of Nollywood’s most consistent performers. The Del York Group is now transitioning into a one-stop shop for the creative industry by developing the critical infrastructure needed to reposition the sector.

The project has been conceptually christened as “Kebulania”, an expression coined from the word Alkebulan, the ancient original name for Africa. The name is pronounced “Alkebu-lan”, which means  “Mother of Mankind” or “Garden of Eden”- a reference to a place of vast potential, new beginnings, and new possibilities; strong foundational concepts on which the project is said to have been established.

The Del-York team’s consortium consists of global partners, chief amongst whom is Messrs. Storyland Studios, a globally renowned industry leader, master planner and developer of film studios, theme parks and creative industry-related infrastructure. Storyland’s expertise in implementing projects of this nature is second to none. With a team of over 100 experts working relentlessly to deliver the project, it is guaranteed to be of the highest quality and international standard.

Speaking at the signing, Mr. Linus Idahosa, Chairman of Del York International Group, spoke of his Group’s commitment to making the project a reality and the many milestones that had thus far been achieved towards its imminent delivery.

He also expressed: “This project has come quite a long way. The sheer effort and sacrifice are a testament to the number of committed team members working around the clock to see it come to fruition. I would like to thank the Lagos State Government, especially the Governor, Mr. Babajide Sanwo-Olu, for his commitment to the project and the industry as a whole. Having this formal signing at such a high-profile event clearly indicates the State’s dedication to attracting FDI into the State through the creative industry.”

Construction of the Africa Film & Media city is set to begin in the first quarter of 2023.