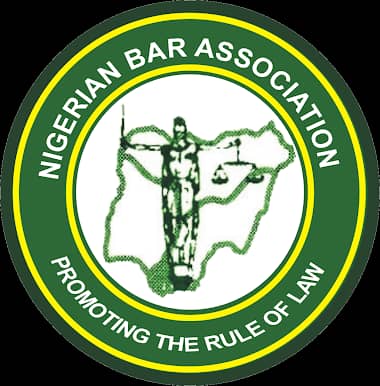 1.0 INTRODUCTION
The Nigerian Bar Association held its Quarterly National Executive Committee [NEC] Meeting at the auditorium, NBA National Secretariat, Central Business District Abuja, on Thursday, the 15th of December 2022.
The meeting was the 1st NEC meeting of the Y. C. Maikyau, SAN-led administration upon being sworn in as the President of the Nigerian Bar Association.
At the said meeting, NEC carefully considered the under-listed issues and resolved as follows:
2.0 STATE OF THE BAR
2.1 Attempts To Undermine The NBA
a.) NEC frowns at recent divisive efforts by certain members of the Association to undermine the Nigerian Bar Association (NBA) for ulterior motives, and firmly resolved, that the NBA is the only recognized, indivisible umbrella Association of all lawyers called to the Bar in Nigeria and there is no other body so recognised or permitted to operate as such.
b.) NEC receives with dismay the report of the attempt to register a parallel body of lawyers as an alternative to the Nigerian Bar Association and frowns at the involvement of some senior members of the Bar and past leaders of our dear Association in the registration process of the alternative body.
c.) NEC categorically resolves that the Law Society of Nigeria (LSN), a body so registered, is unknown to members of the Bar and mandates the NBA President to commence processes for the delisting of the LSN by the Corporate Affairs Commission.
d.) NEC further resolves to sanction all members of the Bar seeking to promote or register a new lawyers’ association, whether using a new name or an old registered, Law Society of Nigeria (LSN).

e.)
NEC particularly resolves that a Past NBA General Secretary, Mr. Nimi Walson-Jack who acted as a solicitor to the promoters of the new law society be stripped of his privileges as past General Secretary and consequently, be suspended from being a member of the National Executive Council (NEC) of the Association.
2.2 Issues Arising From The Letter By The NBA President To The Chairman of Body of Benchers.
a.) NEC considered the letters written by the immediate Past President and current NBA President requesting Chief Wole Olanipekun, CFR, SAN to recuse himself as Chairman of the Body of Benchers in view of a letter written by an erstwhile partner
of Wole Olanipekun & Co, which is now the subject of a matter pending before the Legal Practitioners Disciplinary Committee (LPDC), an arm of the Body of Benchers.
b.) NEC declares that the issue which gave rise to the call for recusal is not a personal issue of the NBA President, but an issue that affects the entire legal profession and casts it in bad light. NEC therefore proceeded to ratify all the letters written by the immediate past and the current Presidents of the NBA to the Body of Benchers requesting Chief Wole Olanipekun, CFR, SAN to recuse himself as Chairman of the Body.
NEC frowns at the sit-tight attitude of the Chairman of the Body of Benchers, Chief Wole Olanipekun, CFR, SAN despite letters from 2 NBA Presidents and therefore calls on Chief Olanipekun, CFR, SAN, to, as a matter of principle, honour the request in the letters of the NBA and recuse himself as the Chairman of the Body of Benchers.
c.) NEC ratifies all the steps taken by the NBA President in relation to the matter and passes a vote of confidence on the NBA President declaring that all the steps he had taken so far on the issue, are for the benefit of the Bar and the legal profession.
d.) NEC recognises the need to explore all avenues to save the legal profession from further embarrassment over the imbroglio and empowers the NBA President to set up a committee to seek alternate ways to resolve the matter.
2.3
3.0
e.)
NEC reiterates the motto of the NBA which is to promote the rule of law and maintains that there are no sacred cows or special persons and as such, all issues of professional misconduct must be dealt with the same way for old and young lawyers alike.
Ratification of NBA Nominees To The Body of Benchers
NEC ratifies the nomination of the immediate past NBA President, Mr. Olumide Akpata as a returnee-member of the Body of Benchers alongside Solomon Umoh, SAN and Usman Ogwu Sule, SAN.
CO-OPTED NEC MEMBERS
NEC ratifies the list of 150 Co-opted NEC Members presented by the President which include heads of certain strategic agencies like the Registrar-General of the Corporate

Affairs Commission (CAC); the Chairman, Independent Corrupt Practices and Other Related Offences Commission (ICPC); the Solicitor-General of the Federation and Director General, Legal Aid Council.
4.0 ANNUAL GENERAL CONFERENCE (AGC) 2023
NEC ratifies the decision of the National Executive Committee to hold next year’s Annual General Conference (AGC) in Abuja from 25 August to 1 September, 2023.
NEC also authorizes the NBA President to constitute the Standing Committees for the Association, including the Technical Committee on Conference Planning (TCCP).
5.0 LAWYERS IN THE NIGERIAN POLICE SERVICE
NEC frowns at the lingering unacceptable situation in the Police Service whereby officers who have obtained law degrees and are subsequently called to the Bar are discountenanced and denied promotions, causing them to remain in the rank and file despite their academic advancement; while their colleagues who obtained degrees in other professions are promoted without delay. NEC endorses the steps taken so far by the President with respect to the issue, particularly the meeting with the Police Service Commission and the pending meeting with Inspector General of Police.
6.0 NBA-NHIS HEALTH INSURANCE SCHEME
NEC approves the subscription for another set of 1000 lawyers (beneficiaries) whom the NBA registered in continuation of the pilot scheme of the NBA-NHIS Programme.
7.0 COMMITTEE REPORTS
7.1 NEC ratifies all Committee Reports as presented to the National Executive Council.
7.2 NEC ratifies the constitution of 6 committees earlier set up by the National Executive Committee and adopts their reports as presented to NEC.
The Committees and members are:
NBA ELECTORAL REFORM COMMITTEE

9.0 STATE OF THE NATION
NEC expresses concern over issues of terrorism, kidnappings, human and child trafficking, bad roads etc. bedevilling the nation. NEC posits that, as the leading body and voice of the profession, it would continue to be at the fore front of urging government to tackle these issues and proffering proper solutions to them.
10.0 CONCLUSION
NEC resolves that the NBA remains one united entity and restates that the unity of the Bar is non-negotiable; NEC therefore enjoins all members to remain resolute in the pursuit of justice and be dedicated towards moving the association forward, despite any perceived division.
Dated this 15th day of December 2022.