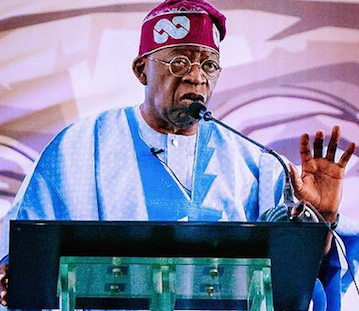 “We don’t even need Tinubu to come to Katsina. Look at what he did in Lagos. Look at his network across the country. When he was a governor in Lagos, he transformed the state,” stated Mr Haro. “Asiwaju has to come to Katsina for campaign, but in our base here in Katsina, take it from me. Asiwaju is going to win with a high number of votes, in sha Allah.”

Mr Haro also pledged that his people would vote for the party’s gubernatorial candidate Dikko Radda.

“I have known Dikko Radda for over 30 years since we were in Kaduna back in 1993. He is humble, honest and a very good person, and he values relationships and can govern Katsina very well,” stated the district head.

Mr Haro added, “He was a local government chairman during the late Governor Yar’adua’s government. He was the first chairman that constructed a road of more than 20km. He built schools and hospitals and started women’s empowerment then.”

Mr Buhari’s media aide Garba Shehu challenged the people of Dumurkol, Daura and the entire Katsina to vote massively for the ruling APC in the 2023 general elections.

Mr Shehu, who gave the charge at the APC governorship campaign at President Muhammadu Buhari’s village, Dumurkol, Daura, in Katsina, said the call had become imperative to avoid possible political embarrassment for the president.

“I work with some people in the campaign train, and they proved that they have (the) capacity and they will never fail,” he stated.

Mr Shehu, who represented the president at the APC governorship campaign, said, “Coming to campaign here it’s just to thank the people of Dumurkol because they need no lecture on whom to vote for to succeed Buhari in 2023.”

He further stated, ”Vote for Asiwaju and Shettima for president and vice president, Dikko Radda and Jobe for governor and also vote for Nasiru Sani as your senator and other APC legislators. Vote for APC from top to bottom.”