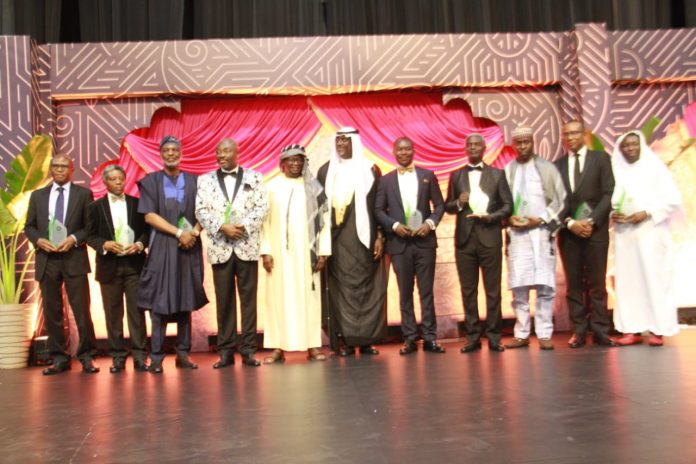 Those who thought that the Lagos Branch of the Nigerian Bar Association (NBA) would be unable to surpass the razzmatazz of last year’s Annual Dinner – tagged ‘Proudly Nigerian’ were in for a pleasant surprise on the night of Friday, December 9, 2022, as Nigeria’s Premier Bar Branch put on an even more exotic display of sights, sounds and colours – this time tagged ‘Arabian Nights’ at the magnificent Landmark Centre in Lagos.

Playing on stereotypes of the Arabian world made popular across the global village over the centuries of cross-cultural interaction by such well-loved movies and cartoons as ‘Aladdin and the Magic Lamp’; ‘Ali Baba & the Forty Thieves;’ ‘The Legend of Sheherazade;’ etc, the event, which was ably compered by the duo of Kalu Abosi (a partner at the firm of Aster Law) and Odiaka Vincent Iweze (co-founder of Pentagon Partners Legal Practitioners) began with a cocktail at the same venue.

NEWSWIRE Law & Events Magazine’s correspondent in Lagos reports that the packed auditorium of the Main Hall of the Landmark Centre was a veritable assemblage of the most accomplished members of the Nigerian legal ecosystem on both the Bar and Bench, as it was graced by the distinguished presence of such luminaries as the NBA President, Yakubu Maikyau, SAN, OON; Retired Supreme Court Olabode Rhodes-Vivour; Mr. Lawal Rabbana, SAN and many others – a good number of who received Awards and other recognitions in the course of the evening.

Welcoming Awardees and other guests to the event, the Chair of the Dinner Committee, Oyinkansola Badejo-Okusanya (who serves as a Partner at the law firm of ALP NG & Co.) and the Chairman of the Lagos Branch of the NBA, Ikechukwu Uwanna, both expressed satisfaction at the fact that the Branch had built on the success of the 2021 Dinner, describing the feat as testimony to the inventiveness of the Lagos NBA Branch and its resilience in the face of daunting challenges.

On his part, Uwanna called on attendees to spare some thought – even as they wined, dined and networked – to the prevailing socio-economic and political situation in Nigeria (and in particular the forthcoming 2023 general elections) and the need (nay, the urgent imperative) to make the right choices in terms of who leads the country and the respective states in next year’s polls. He added that the legal profession, in particular, was uniquely placed to ensure that the leadership that emerges from next year’s exercise has the character and capacity to deliver the change that our beleaguered nation needs right now. In a reference to the Dinner Speaker, a Kenyan lawyer and activist, Uwanna ended his speech by acknowledging the electoral strides recently achieved by other African jurisdictions, calling them an inspiration, going forward.

The aforementioned Dinner Speaker, Eric Theuri is the current President of the Law Society of Kenya (the East African nation’s equivalent of the Nigerian Bar Association). A managing partner at the law firm of Theuri Wesonga & Co., based in Nairobi, the Kenyan capital, Theuri is the immediate past Chairman of the Nairobi Branch of the LSK before being elected the 50th President of the national body. Theuri centered his address on the forthcoming 2023 elections in Nigeria, from the perspective of two key election cycles in his country – namely, the recently-concluded polls that saw the election of former vice-president William Ruto as Kenya’s 5th President, and the wave of deadly violence that followed the controversial re-election of former President Mwai Kibaki in 2004 (in which Theuri’s own family suffered severe losses when much of their properties were destroyed). Describing Kenya’s ’emotionally-charged’ elections – and the shenanigans that usually accompanied them – as the stuff of Nollywood, Theuri praised the relative calmness of Nigeria’s transitions of power since 1999; he singled out ex-President Goodluck Jonathan’s concession of defeat in 2015 for praise, saying it was an action which reverberated across Africa. Nevertheless, he made it clear that it was ‘not yet Uhuru’ for the Nigerian electoral experience as far as best practices are concerned. He therefore charged the NBA on a number of tasks, key among which is the need to drive better access to justice for all stakeholders whatever their station in life, citing the pivotal role of the LSK in the legal challenges that followed the most recent elections in his country.

On an evening notably devoid of lengthy speeches, NEWSWIRE’s correspondent reports that one of the main highlights was a rousing performance by a troupe of delectable belly dancers.

This was followed by the formal presentation of Awards. The first of these Awards were to newest members of the NBA Lagos Branch to be elevated, along with their counterparts from other Branches across the nation, to the prestigious rank of Senior Advocates of Nigeria, as announced on November 28, 2022. The new silks, whose Awards were presented to them by the NBA President, YC Maikyau, SAN, were as follows: Said Olugbenga Sanusi, SAN; Prof. Oludayo Gabriel Aokaye, SAN; Ayodeji Oyewole Omoyosho, SAN; Henry Eshijonam Omu, SAN; Inam Akpadiaha Wilson, SAN; Aderemi Moshood Bashua; Abubakar Sulu Gambari, SAN; Victor Odafe Ogude, SAN; Andrew Mwajim Malgwi, SAN; Kelechi Chinedum Obi, SAN; Godson Chukwudi Ugochukwu, SAN; and Rotimi Iseoluwa Oyedepo, SAN.

Special Awards were also presented on the night to legal professionals, on both the Bar and the Bench, who had demonstrated exceptional dedication and excellence in the outgoing year. The first of these Awards, for judicial excellence, were handed out to the afrementioned Hon. Justice Rhodes-Vivour, JSC (retired), along with Hon. Justice (Dr.) Nnamdi Dimgba; Hon. Justice Ikechi Gerald Nweneka; and Hon. Justice Rahman Adeshola Oshodi.

The Special Award for Exceptional Leadership went to the immediate past NBA President, Olumide Akpata, while a trio of Bar leaders – Richard Ayodele Akintunde, SAN; Tobenna Erojikwe; and Mrs. Bolatumi Olasumbo Animashaun – were also honoured during the event for ‘Exceptional Services to the Lagos NBA Branch.’

Another highlight of the event, which drew an enthusiastic – nay, frenzied – response from the assembled attendees was a contest to determine the guest who embodied, in his or her Arabian costume or ensemble, the ‘Most Creative Expression of the Arabian Nights Theme’. At stake was a mouth-watering prize, courtesy of one of the event sponsors, Royal Air Maroc (the Morrocan flag carrier). The male category produced a tie; the two regally-attired gentlemen, along with the lone female winner, were presented with their prizes by representatives of Royal Air Maroc.

The event drew to a close with a short vote of thanks by the Secretary of the NBA Lagos Branch, Nta Ekpiken.

The rest of the glittering evening was given over to dancing, as attendees were treated to an electrifying performance by Nigerian pop artiste Inyanya.

It was indeed a fitting way to mark the end of a rather challenging and eventful year in the annals of the nation’s Premier Bar Branch, as it looks forward to what promises to be a momentuous year for Nigeria and its people as a whole, and its legal fraternity in particular.