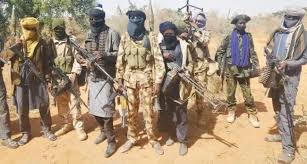 A heavily pregnant mother of three has been gang raped to death by suspected bandits who invaded Dnakundna village in Shiroro Local Government Area of Niger State.

The incident occurred when the woman ran into the bandits as she fled from an attack on her village.

Sources from the community told The Nation that the terrorists had imposed a N2 million levy on the villagers to allow them to harvest from their farms.

But it was gathered that the villagers could not pay the sum, which angered the bandits.

To avoid being attacked, the villagers, especially women and children in their numbers, decided to leave the village but unknown to them that the bandits had already been informed of their mass exodus and decided to lay ambush.

The pregnant woman was not lucky as she and her three children ran into the ambush, and were matched into the bush.

After being r#ped by no fewer than seven men, the woman was left with bruises all over her body.

She was taken to the hospital by her family but died on Friday night, December 23, 2022.

It was gathered that many villagers were abducted during the attack.