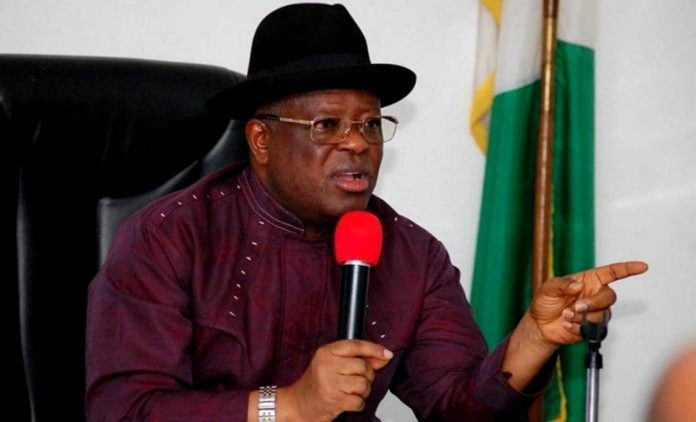 The Court of Appeal in Abuja, Friday reversed the March 8 judgment by Justice Inyang Ekwo of the Federal High Court, Abuja, which sacked Governor David Umahi and his Deputy, Barr. Kelechi Eric Igwe from the office.

Recall that the duo were sacked for defecting from the Peoples Democratic Party (PDP) to the ruling All Progressives Congress (APC).

A three-member panel of the appellate court held in a judgment that the nation’s Constitution did not provide any punishment for a Governor or Deputy Governor, who defected from the party on which platform he/she was voted into office.

In the lead judgment, Justice Haruna Tsanami, the appellate court held that the only option opened to a political party, aggrieved by the defection of a Governor or Deputy Governor, is to explore the impeachment option provided in the Constitution.

The Court of Appeal in Abuja aligned with an earlier decision on the same issue given by the Enugu Division of the Appeal Court.

Reacting to the development, the State Commissioner for Information and State Orientation, Barr. Orji Unchenna Orji described the Appeal Court verdict as victory for democracy and rule of law.

“We thank God for the judgement of the court of appeal. For us in Ebonyi State, it is a victory for our democracy, a victory for the rule of law and it is a divine vindication of the Governor of Ebonyi state, His Excellency, Engr. Chief David Nweze Umahi, FNSE, FNATE, CON, is a man after the heart of God.

“Enemies of progress have severally come with distractions of many sorts including allegations that are unfounded and mendacious and don’t reflect the actual situation of things in the State.

“Still, God has always vindicated the Governor and members of the public have always come to appreciate that the Governor is on the side of righteousness.

“The accusations and ochetrations of the enemies against the Governor are rather a source of encouragement for him to continue in his good works of delivering the democray dividends to the people of Ebonyi State and the people will stand with the Governor at all times because we know that he is on a mission to make Ebonyi State one of the leading economies of the federation.

“His coming on board as a Governor is divinely orchestrated that people may have a sense of self-actualization and self-worth and I can tell you that the Governor has achieved that and so we will continue to give him total support and solidarity.

“Our plan as a people is to have a good successor that will continue from where he will stop on the 29th day of May 2023, we will queue behind the APC Governorship Candidate, RT Hon. Francis Ogbonna Nwifuru as we have seen in him, a man of experience, a man of energy and agility, a man that has got all it takes to continue from where the governor will stop and so we thank God for giving our Governor victory, we thank the people of Ebonyi State and indeed Nigerians for the prayers for our dear Governor.”

Speaking on the ruling, Governor David Umahi described the judgement as a sound juridical articulation, which reinforced the provisions of the Nation’s Constitution in matters relating to defection.

The Governor’s reaction was contained in a statement by his Special Assistant on Media and Strategy, Chooks Oko immediately after the judgement in Abuja today Friday, October 28, 2022.

He observed with contentment that the Court of Appeal has by the pronouncement, proven once again, that the Nation’s Judiciary remained the last hope of the common man.

He emphasized that the judgement has further strengthened his avowed commitment to continue offering his best for the State, assuring that no amount of distraction can derail him.

The Governor however, dedicates the latest victory, first, to God, and to all Ebonyians and lovers of justice across the Country.