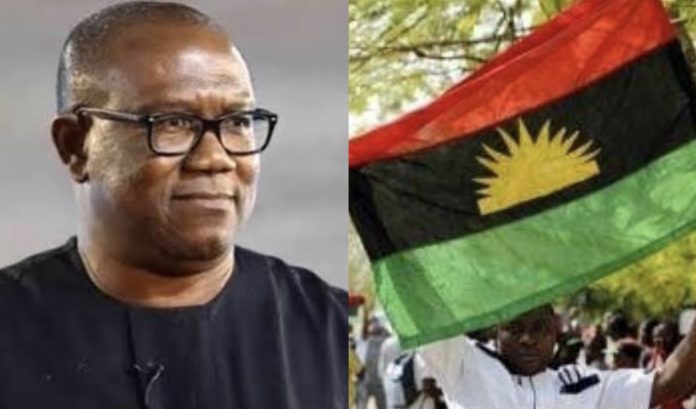 The Labour Party presidential candidate, Peter Obi, says he would engage separatist group, Indigenous Peoples of Biafra (IPOB), to restore peace in the South-East, if elected president in 2023.

Mr Obi, who had been promising to run a democratic government if given the chance, said the proscribed group had been agitating legitimately.

“In our South-East, it is a simple thing, I will dialogue, I will discuss, it is a democracy, and in a democracy, you govern by consensus,” Mr Obi said in an interview with the Daily Trust. “If anybody says he is not happy, you call him and you sit him down and discuss with him.”

He added, “People agitate in my house, my wife, my children. If you say to me you have lived with your wife all through and you people have never quarrelled, then you are not married. You disagree and settle it – that is agitation.”

Asked whether he shares the federal government’s position in designating IPOB as a terrorist organisation, he told the newspaper, “I don’t want to go into that place. I have told you, I will dialogue with anybody, anything they like, let them call you, I will meet and we discuss.”

The Labour Party presidential candidate posited that there are also agitations in other international countries, noting that Nigeria should not be an exemption.

“I have said it times without number, Nigeria does not have more agitation than Brazil, if you want I will show you countries that have had agitations in the past, whether it is Brazil, Mexico, whether it is this,”, Mr Obi argued in the interview granted the Abuja-based newspaper.

IPOB is a separatist group that is leading an agitation for an Independent state of Biafra, particularly in the South-East and South-South part of Nigeria.

The IPOB was founded in 2012 by Nnamdi Kanu, a British-Nigerian known for his advocacy of the Biafran independence movement.

The group has repeatedly been accused of masterminding deadly attacks against individuals and bodies against their agitation, including security operatives, traditional rulers, and politicians among others.

In 2017, the Nigerian government, under controversial circumstances, proscribed the group and labelled it a “terrorist organisation” under the Nigerian Terrorism Act, amid major violent crime its members allegedly orchestrated.

The government had also enjoined the international community and foreign countries like the United Kingdom to also designate the Nnamdi Kanu-led IPOB as a terrorist organisation but the call has so far been rebuffed.

Rights bodies have also faulted government’s designation of IPOB as a terrorist organisation, arguing that their agitations were legitimate.

Mr Obi, a former governor of Anambra in Nigeria’s South-East, had also faulted the tagging of IPOB as a terrorist organisation, insisting that it was wrong to have proscribed the group.

“The only thing I disagree with is naming IPOB terrorists. They are not terrorists. Those who took the decision may have information that I don’t have.

“I live in Onitsha, and I can tell you they are not terrorists. They (IPOB members) are people I pass on the road every time, (and) every day,” Mr Obi had said in a viral video clip in 2017.

President Muhammadu Buhari’s regime in June 2022, asked the largest social media network, Facebook, to stop allowing members of the IPOB to use the platform to incite violence and instigate ethnic hatred in the country.

The Buhari regime had also blamed the group for the pipeline vandalisation in the oil-producing regions thereby hampering production.

Many Nigerians especially critics of the regime have consistently beckoned on Mr Buhari to instead dialogue with the IPOB, like the federal government had done with Niger Delta militants and Boko Haram insurgents and bandits in the North, to avoid the continued breakdown of law and order and security threat to the region.

Despite its proscription, the group continued to weigh in its dominance in the South-East, with residents respecting its weekly ‘sit-at-home’ order on Mondays.