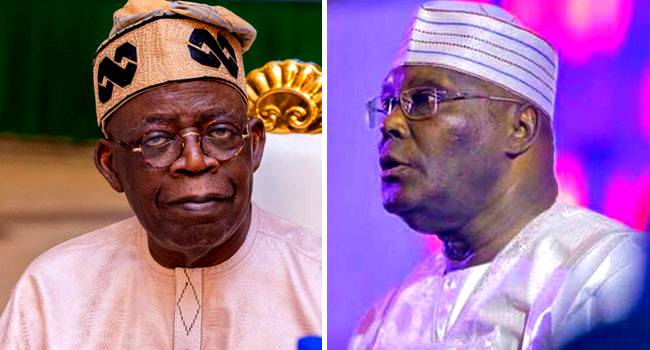 Atiku, the PDP presidential candidate, served as vice president in the Obasanjo administration between 1999 and 2007.

But, Tinubu, while speaking during the flag-off of the Delta APC governorship campaign in Warri on Saturday, the party’s presidential candidate claimed Atiku fought Obasanjo during their tenure.

He stated, “Our rivals do not have shame. They are fighting in the public, how can they think of governance?

“When Atiku was there, he was fighting his boss in public. They were telling us how they spent money to buy cars for their girlfriends. Do they have shame? Will you vote for them again?, Tinubu told the crowd of supporters.

He said, “Tinubu assured the APC will deliver its promises to Nigerians if the party wins next year’s elections as he redoubled his accusation that the PDP failed the country.

“I will commit to your progress and fulfill all the promises made to you. You are the future of this country and the heart and soul of Nigeria.

“Your environment is as important as gold mining. Your health, welfare, and dream will be realised for a stable and prosperous Nigeria.”