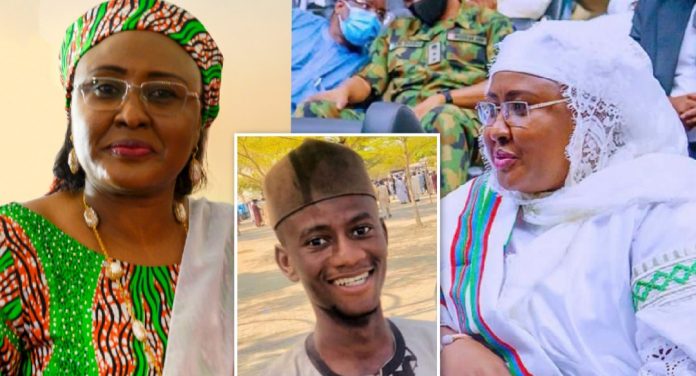 The State Security Service has locked up a student of Federal University Dutse over a social media post deemed defamatory against Nigeria First Lady Aisha Buhari.

It was heard that Aminu Adamu Muhammed had in June posted on Twitter that Mrs Buhari had suddenly added massive weight after taking part in plundering the nation’s meagre resources as the masses endured hardship under her husband’s brutal regime.

In the June 8, 2022, tweet, Mr Muhammed chastised Ms Buhari in Hausa: “Su mama anchi kudin talkawa ankoshi”, which could be translated as “the mother has gotten fatter by eating masses’ money.” Mr Muhammed’s friends said he made the post because he was frustrated about the prolonged strike by universities across the country. The strike, which started in early 2022, ended last month after nine months.

From a near-athletic build when her husband was seeking office in 2015, Mrs Buhari’s stature has recently ballooned, fueling speculation at a point that she might be ill or pregnant. She denied both claims.

A family source said Mr Muhammed, 23, was picked up by officers on November 8 on the campus ground of Federal University Dutse, Jigawa. The student was reportedly subjected to severe beating by the officers following his arrest at about 12:00 noon.

He was summarily transferred to Abuja and was briefly allowed to contact his father Adamu Shalele Azare about his location, which the family thought was a police station.

Peoples Gazette was later told that the State Security Service was behind Mr Muhammad’s arrest. Since the 1990s, the secret police has maintained a record of repression and deployment of brutality to enforce regime preservation.

It was not immediately clear if the family has been able to contract a lawyer over the matter. A spokesman for the SSS did not immediately return a request seeking comments from The Gazette on Saturday afternoon. School authorities, including the environmental technology department where Mr Muhammed studies, declined comments.

The incident marked the latest manifestation of assault on fundamental rights that has characterised Muhammadu Buhari’s regime. Since 2015, thousands of Nigerians have been arrested, jailed or exiled over speeches deemed unflattering towards the government or its allies. Like her husband, Ms Buhari has repeatedly targeted journalists for harassment by federal agents.

Still, the administration has continued to downplay its role in deterioration of human rights since 2015, saying most of the attacks were carried out by rogue officers who were not necessarily delegated by the president or his cabinet members and other appointees.