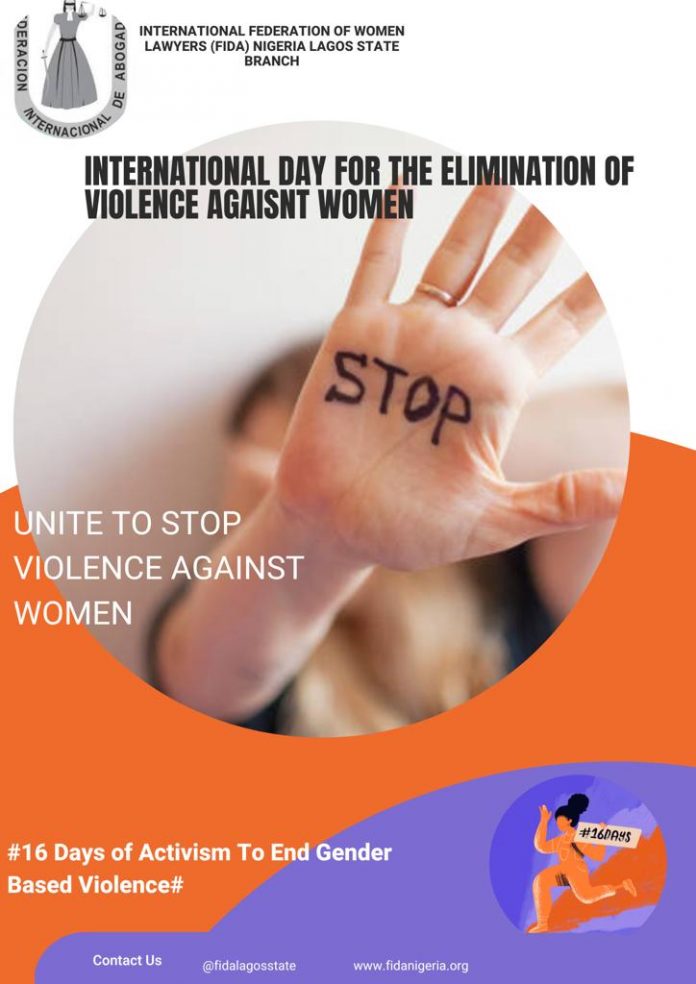 FIDA Nigeria, Lagos State branch joins the rest of the world to flag off the annual 16 Days of Activism against Gender-Based Violence campaign which starts today the 25th November 2022, the International Day for the Elimination of Violence against Women, and runs through International Human Rights Day on 10 December.
According to the United Nation data given, more than 1 in 3 women experience gender-based violence during their lifetime, in 2021, nearly 1 in 5 women aged 20-24 were married before turning 18. This is to state that gender-based violence has risen much more than the figures in the past and this can be linked to the rise in insecurity, economic instability and insurgencies over the years as more women have been subjected to economy torture and means of bargain by terrorist as more women and children are now object of target.

FIDA Lagos calls on all relevant agencies and individual organizations to raise awareness against all forms of gender-based violence practices such as under reported harmful p practices against women and girls which happen every day in Nigeria, sexual assault and physical violence, human trafficking, child marriages, Female Genital Mutilation prevention and management, Sexual and Reproductive Health and Rights etc.
The discussion around GBV need to go beyond rhetoric into actions, organizations, government agencies and civil societies have done way too many campaigns but now is the time to take this campaigns a step further into making sure the enforceability of the relevant laws such as Violence Against Person’s Prohibition Act, 2015, Protection against Domestic Violence Law of Lagos State (PADVL) and the Constitution of The Federal Republic of Nigeria 1999 (as amended) amongst other relevant Laws. Also, the campaign must include the domestication of the relevant laws in states that are yet to do so.
As we mark the global 16 Days of Activism under the theme “Unite Activism to end violence against women and girls” we believe that Organizations and agencies in an attempt to put final end to this menace must begin to put more energy into women and the girl child education, economy and financial literacy, more attention towards high risked ages and persons with disability of any kind, poverty, hunger and insecurity challenges, after care for survivors during recovery period, education on mental and psychological health and wellbeing in workplace, involvement of more women at social, political, economic and policy making, the engagement of boys and men as gate-keepers, partners and allies in the fight against GBV.

To this end, we must join forces to vehemently oppose any and every act of violence against women and girls first by becoming a safe place for survivor, stop victim blaming and shaming, get knowledge in the root cause of violence, call gender-based violence what it is, confront and reflect on your own beliefs and ideas. Today being the first day of the global 16 days of activism against gender based violence, FIDA Lagos starting with an awareness walk alongside lined up of events to join her voice with the entire world in the campaign against GBV and together we will make the world a safe place for women and girls.