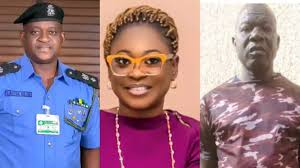 The police have defended Drambi Vandi, a cop under investigation for killing a pregnant Lagos lawyer, Bolanle Raheem. The Nigerian police claimed Mr Vandi might have acted under a spell.

“I’m sure many elders will know what they called efun, edi, aransi, asasi, ebilu… Whatever that happens in the physical realm is controlled in the spiritual realm. That’s the spiritual aspect of it,” said the police in defence of the cop.

Mr Adejobi added, “The man was never a drunk. In fact, I was told he is a very nice man. I know him… The guy has been a very good man. Forget the story that he was this or that while in Niger. He was never in Niger state command.”

“He is a very nice man. I think he is from Plateau state…”, Mr ‘Adejobi said.

Mr Vandi was arrested for shooting and killing Ms Raheem on Christmas Day.

He was arraigned before the Chief Magistrate Court, Yaba, on one count of murder and remanded at the Ikoyi Prisons pending legal advice from the director of public prosecution (DPP).