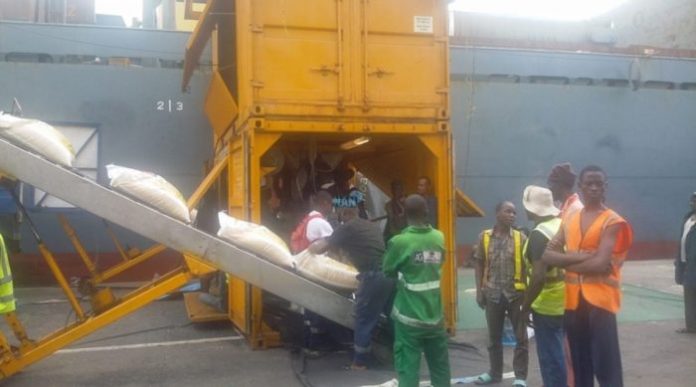 The Minister of Transportation, Mr Mu’azu Sambo, says the Federal Government is not owing dockworkers sacked due to port concession in 2006.

Sambo said this at the 34th Maritime Reporters’ Association of Nigeria (MARAN) Anniversary and Awards on Friday in Lagos.

The anniversary was themed: ”16 Years of Port Concession: The Pains and the Gains.”

He said that the only set of people that were not paid then were those working for private sector but were given severance packages.

Sambo also emphasised the Federal Government would remain committed to policies that would boost the growth and development of the Port Community System.

“Government is embarking on many projects to help the maritime industry, the Deep Blue Project which will ensure cost of importing cargo into the country is reduced.

“For the Lekki Deep Port, there is no reason why we should have a replica of Apapa port there and so I have instructed the Nigerian Ports Authority to ensure no movement of cargo by road,” he said.

In his paper presentation, Mr Hassan Bello, former Executive Secretary, Nigerian Shippers’ Council (NSC), noted that there was the need for constant review and re-alignment of port concession agreement especially in the light of international trades in commerce.

According to Bello, the country cannot stop or even pause, as reforms must be continuous.

“The challenges are vast and varied but the prospects are enticing.

“The maritime industry must be comprehensively executed and strategically run as a fundamental economic factor with the target of contributing massively to the economic growth of the country,” he said.

Bello noted that the port reform in Nigeria was necessary but crammed without regard to other sectors.

“The reform is critical but not comprehensive and stands the risk of being de-railed, curtailed, distorted or even reversed. This is because the legal framework is not dynamic and wholesome,” he said.

Bello said that government must perform it’s part as a major driver of the reform.

“Government must build and enhance critical infrastructure in which the port reform is anchored.

“Those critical infrastructure must be deliberately sited to make for co-ordination and linkages, especially inland connectivity. Transport infrastructure cannot be located haphazardly or anyhow.

“Federal Government must provide conducive operating procedure, ease cost of doing business and fight corruption that threatens to a put brake on reforms.

“The regulatory institutions must be assigned specific roles.

“Concessioning is give and take, the involvement of stakeholders is necessary not only in drafting agreements but in monitoring the tenets of the agreement,” he said.

Also Dr Bolaji Akinola, representing the Seaport Terminal Operators Association of Nigeria, said that the pains of the concession was the fact that people lost their jobs.

According to him, the pains should be ameliorated by the Federal Government, whatever that is due to them should be given to them.

“There are also gains in human angel as before the concession dockworkers were casual workers and they go home with N1,500 but this has changed.

“To reap the benefits of the concession, ancillary challenges such as clearing processes, infrastructure issues should be addressed,” Akinola said.

Dosumu, however, called for training of journalists so as to get the best out of them.

The News Agency of Nigeria (NAN) reports that the event also witnessed award presentations to Princess Vicky Haastrup, as the Face of Port Concession in Nigeria, and Dr Taiwo Afolabi, Maritime Person of the Decade, among others.