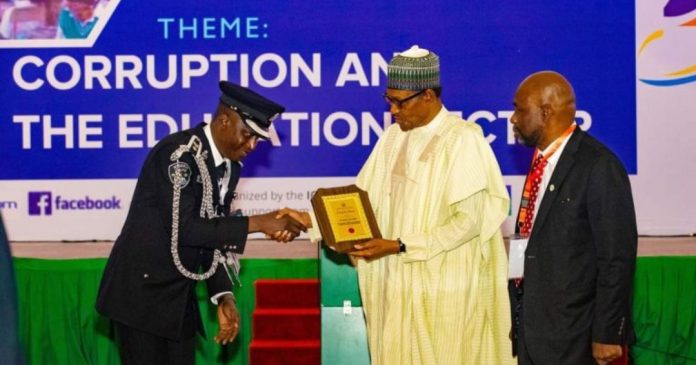 Chief Superintendent of Police Daniel Amah has been promoted to the rank of Assistant Commissioner of Police (ACP) for maintaining the integrity of the police by rejecting a $200,000 bribe in the course of his duty.

In addition to the special promotion, the Police Service Commission (PSC) also awarded the sum of N1 million by the PSC, as reward and encouragement for maintaining the integrity of the police.

This was disclosed by PSC sspokesperson Azuka Ogugua in a statement on Friday, in Abuja.

Mr Amah was also recently honoured with the 2022 Public Service Integrity Award by President Muhammadu Buhari, during the 4th National Summit on Diminishing Corruption in the Public Sector.

The event was organised by the Independent Corruption Practices and Other Related Offences Commission (ICPC), in collaboration with the Office of the Secretary to the Government of the Federation (OSGF), and the Joint Admission and Matriculation Board (JAMB).

The Chairman of PSC, Clara Ogunbiyi, a retired Justice of the Supreme Court, said Mr Amah represented the integrity and good character of a deserving Police officer.

Ms Ogunbiyi said the reward and special promotion would serve as a morale booster for all police officers to keep doing the right thing always.

“After a bank staff confirmed the availability of the money at the bank to the victim, the transaction took place.

“However, the suspect arranged with armed robbers to track and rob the victim while the money was being transported.

“When the matter was reported to the Police Division in Kano State where SP Daniel Amah was the DPO (Divisional Police Officer), it commenced investigations.

“In the course of the investigation, they traced the principal suspect, Mr Zaki, who offered 200,000 dollars to Amah to bury the case through a bank staff.

“The offer was rejected, the bank staff was promptly apprehended, and which also led to the arrest of the suspect. The 200,000 dollars was recovered and registered as an exhibit,” Ms Ogunbiyi explained.

The ICPC Chairman, Professor Bolaji Owasanoye, described the new ACP as a distinguished public servant, who against all odds, refused to be corrupted and compromised.

“We are particularly delighted that the Awardee is from the Nigeria Police, an institution often derided, maligned and under-appreciated.

“In 2021, one of the Public Service Integrity Awardees was also a police officer.

“We commend the Inspector General of Police for producing these beacons of light, in a desert of despair,” Mr Owasanoye stated at the anti-corruption summit, which was held in Abuja.

Mr Amah, an indigene of Jos East, Plateau State, joined the Nigerian Police Force as a Cadet Inspector in 2002.

He is currently serving as the DPO of Bompai Police Station, Nasarawa Local Government Area of Kano State.