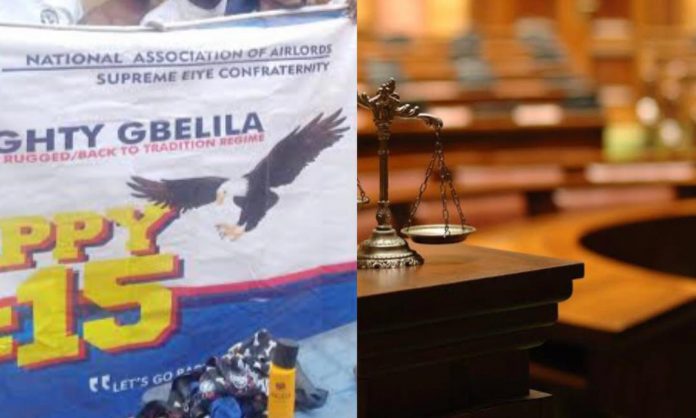 The police in Osun State on Friday arraigned two suspects before an Ile-Ife Magistrates’ Court over cultism and conducting themselves in a manner that can cause a breach of peace by smoking weeds in the public places.

Adewale Ayo, 25, and Adesakin Fatai, 22, were alleged to have paraded themselves as members of Eiye Confraternity and disturbed the peace of the neighbourhood of Oniyangi area.

The prosecutor, Inspector Sunday Osanyintuyi, told the court that the defendant committed the offence on November 29, 2022, around 7:30 p.m. at Oniyangi Area, Ile-Ife.

Mr Osanyintuyi said that the defendants conspired together to commit felony to wit: cultism, unlawful possession, and serious assault, smoking and stealing.

The prosecutor stated further that the defendants had in their possession wraps suspected to be Indian Hemp.

Mr Osanyintuyi said that the defendants unlawfully resisted arrest and publicly obstructed the police officers while performing their duty.

Accordingly, Ayo and Fatai have in their possession one ITel Botton Phone and one Tecno Android phone respectively, which they cannot give a satisfactory account of how they got them.

The defendants, however, pleaded not guilty to the seven-count charge of: conspiracy, cultism, unlawful possession, serious assault and conduct likely, smoking and stealing.

Their defence counsels: Monday Gilbert and Philip Fasanmoye, pleaded for the bail of their clients in most liberal terms, promising that they would not jump bail, but would provide reliable sureties.

Magistrate O.T. Badmus granted them bail in the sum of N100,000 with one surety in like sum.

Mr Badmus added that the sureties must swear to affidavit of means, reside within the court jurisdiction, addresses to be verified by the prosecutor.

He stated further that the surety must present three years tax clearance certificates and present Identity Cards of being gainfully employed.

He ordered for the remand of the defendants in Ile-Ife Nigeria Correctional Custody, pending the perfection of their bail conditions.

The case was adjourned until January 1, 2023, for hearing.