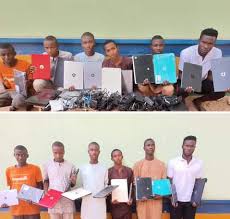 Six members of the Notorious group, Shila Boys have been arrested by men of the Adamawa State Police Command for allegedly burgling and stealing from peoples’ shops and houses within the State Capital.

Spokesperson of the command, DSP Sulaiman Nguroje, in a statement on Sunday, January 8, 2023, said fourteen stolen laptops were recovered from the suspects.

“Further to the Command’s renewed commitment to checkmating crime and criminality ahead of President Muhammadu Buhari’s visit to Yola, the Adamawa State Capital, the Command on the 7/1/2023, disconnected the criminal network of Shilla gangsterism, connecting Upper and Down Luggere in Yola North Local Government,” the statement read.

“The suspected Shila boys specialise in burgling and stealing valuable items from peoples’ shops and houses within the State Capital.

“The outcome of this commitment designed by the command to ensuring public order, safety and security before, during and after the visit of Mr President, led to the arrest of 6 suspects, Faisal Abubakar,18, Abdulsalam Muhammed,17, Mahmud Musa ,18, Abdul Aziz Muhammed 18, Abubakar Jidda, 18, and Christopher Daniel, 30, all of various addresses.

“Interestingly, fourteen computer laptops were recovered from the suspects in the course of investigation.”

The Commissioner of Police, CP SK Akande, while commending officers and Men deployed for denying the suspects the opportunity to escape arrest and further directed total clamp down on criminals who are bent on disrupting the peace of the public.

The CP called on the populace to always inform the police of the whereabouts of Criminals and their hideouts.

The police boss equally assured the Government and good people of Adamawa state, of sustained effort to dislodging all criminal hideous and black spots in Adamawa state.