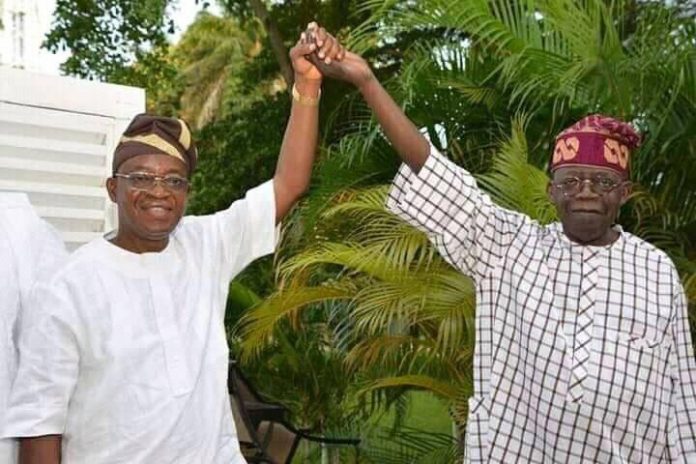 The ruling All Progressives Congress and the legal directorate of the party’s presidential candidate, Asiwaju Bola Tinubu, says there is no cause for alarm over the court ruling nullifying the candidacy of Osun State Governor, Adegboyega Oyetola, and his deputy governorship candidate, Benedict Alabi, for the July 16 governorship election.

This is even as the Osun State governor began the process to appeal the judgment that nullified his nomination as the candidate of APC on Thursday.

A Federal High Court sitting in Abuja had on Friday nullified the nomination of both Oyetola and Alabi.

Ruling on a suit filed by the People’s Democratic Party challenging the nomination of Oyetola and Alabi, Justice Emeka Nwite agreed with the submission of the PDP on the grounds that Governor Mai Mala Buni who submitted their names to INEC violated the provisions of Section 183 of the Constitution of the Federal Republic of Nigeria and Section 82(3) of the Electoral Act.

But reacting to the judgment, APC National Publicity Secretary, Felix Morka, told our correspondent that the judgment of the Federal High Court nullifying the nomination of Oyetola is fundamentally flawed and unsupportable.

He said, “I am confident that the decision will not pass appellate scrutiny. For one, the decision flies in the face of a valid and subsisting majority Supreme Court decision in Akeredolu’s case which settled the question as to the validity of HE Mai Mala Buni Caretaker Committee.

A former Legal Adviser of the and Head of Legal Directorate of the Tinubu Campaign Organisation, Babatunde Ogala, has dismissed claims that the recent ruling may also have a dire consequence for Tinubu’s presidential ambition.

This is even as he accused the Nigerian media of attempting to blow the issue out of proportion.

“You media people should stop looking for ways to sensationalise matter. It is a non-issue. What does the APC Constitution says? It mentioned ‘NEC’, which you and I know is not an individual. Was the NEC not properly constituted?

“Has the Supreme Court also not decided the same case in Akeredolu vs Jegede that it doesn’t matter the nomination of a candidate? As far as the law is concerned, it is the party they recognize. Unless, of course, the party says this is not our nominee. Was this matter not determined by the Supreme Court in the Akeredolu vs Jegede case? Was it not the same issue? Will the High Court now overrule the Supreme Court? Though I must say I have not read this particular judgment. So I will not condemn the judgement. But no cases are the same,” he said.

The legal icon argued that even if Malam Buni was the interim chairman that superintended over the Convention that produced Adamu, it does not take away the legitimacy of Adamu.

Ogala further said that Oyetola’s case and the national convention which many people are speculating are two different issues.

He said, “If we are going to talk about the legitimacy of Adamu’s produced committee, you need to file a fresh suit on it and join Adamu and other members elected at that Convention whose offices will be affected whichever way the decision goes.

“Oyetola’s case has absolutely nothing to do with our National Convention. They are two different things. I am aware that there is nowhere in the Constitution and as affirmed by Supreme Court in Jegede vs Akeredolu that the party is the one that owns the candidate. It is a non-issue. The last bus stop is the supreme court,” he said.