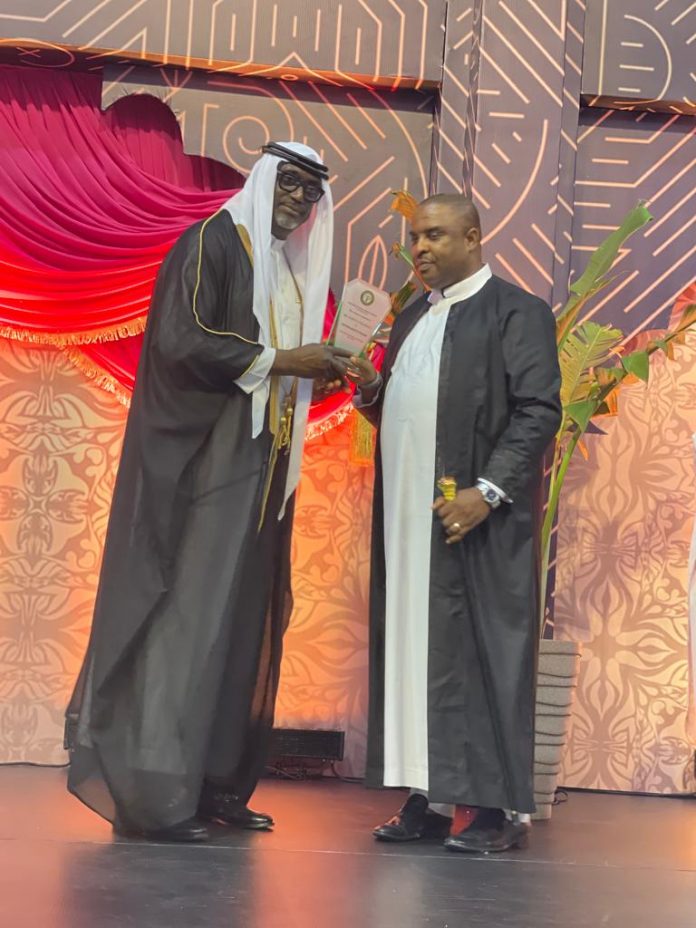 There is a famed saying that is at least two thousand years old and can be found in each of the four Synoptic gospels in the Bible. The variant found in the Book of Mathew 13:54-57 is credited to Jesus Christ himself and goes thus, “a prophet is not without honour except in his own town and in his own home.”

The above phenomenon has been studied by a number of writers and varying reasons have been advanced to explain why it has historically been difficult for humans to acknowledge the gifts of any individual when that individual was in their presence, nearby, or even still alive. For every rule, however, there is an exception and so once in a while a prophet is honoured in his home. And when it happens, it deserves commendation. This rightly encapsulates what transpired on Friday 9th December 2022 during the excellent annual Law Dinner of the Lagos Branch of the Nigerian Bar Association (NBA Lagos) which took place at the Landmark Centre, Victoria Island Lagos.

As part of major highlights of the Arabian Night-themed Law Dinner organised by the Oyinkansola Badejo-Okusanya led Dinner Committee, there were different awards of recognition and excellence presented to outstanding members of the legal profession (from both the Bar and the Bench) for their positive contributions to the profession in Nigeria. One of such awardees was TOBENNA IFECHIKWULU EROJIKWE, a partner at The Law Crest LLP, the Chairman of the Governing Board of the Institute of Continuing Legal Education of the Nigerian Bar Association (NBA-ICLE) and the Chairman of the Technical Committee on Conference Planning (TCCP) of the audacious 2022 Annual General Conference of the Nigerian Bar Association (NBA-AGC) tagged BOLD TRANSITIONS, who was honoured with the unprecedented award of Exceptional Service to the Branch.

While the activities of Tobenna – as he is fondly and simply addressed by family, friends and colleagues – in the above referenced capacities at the national level are all worthy of celebration and awards in their own right, it is altogether fitting, albeit a departure from the norm, that Tobenna was recognised “at home” by NBA Lagos for the transformational role that he played in elevating Continuing Professional Development to become the cardinal function of the administration of the NBA Lagos Branch and thereby provided a stellar example for the rest of the country to emulate.

As the legal blogsite, Lawhauz accurately reportedyesterday, Tobenna served consecutively as a two-term Chairman of the Continuing Legal Education Committee of the NBA Lagos Branch and in that time, he entrenched the philosophy of making training and capacity building initiatives available, affordable, and accessible to allmembers of the Branch. Most of his very original and innovative ideas have become institutionalised and have revolutionised the entire Continuing Legal Education landscape in Nigeria. Some of the highlights of Tobenna’sfour year tenure as Chairman of the CLE Committeeinclude:

1. Training Collaborations: This initiative saw the CLE Committee facilitate Tax Law Trainings with Faculty of experts from PWC as well as the collaboration that led to Chartered Institute of Arbitrators (CIArb) certification trainings at a huge discount to 200 members of the Lagos Branch, with the NBA Lagos Branch, at Tobenna’s insistence, paying the Naira element of the fees for the first 100trainees at the rate of Forty Five Thousand Naira each.

4. Group Mentorship Scheme: This two-in-one scheme, encompassing a training and mentorship session, saw respected and very senior members of the Branch including, Mr Gbenga Oyebode; Dr Wale Babalakin, SAN; Mr George Etomi; Chief Anthony Idigbe, SAN; Mr Asue Ighodalo; Sola Adepetun; as well as Tobe Okigbo and Ifeoma Utah from MTN legal team, provide speed mentorship trainings to members of the Branch at no cost. The scheme afforded the mentees who numbered between 70 and 100 in each instance, an opportunity to tour the offices of the respective Mentors during the mentoring sessions.

5. One-on-One Mentorship Scheme: Under Tobenna’sleadership of the CLE Committee, NBA Lagos Branch set up a mentorship scheme that successfully paired 125 young lawyers with mentees across 5 continents using the buddy mentoring model. This scheme was the very first of its kind in the NBA and created a huge platform for the building of enduring relationships. Little wonder the scheme was adjudged to be very successful.

6. Training Collaboration with the NBA-ICLE: Very significantly too, the CLE Committee under Tobenna’s leadership contributed to reviving the NBA- ICLE by collaborating with the latter on the Intellectual Property, Energy Law & Policy as well as Taxation trainings that featured over 10,000 lawyers.

It was thus in recognition of the above and other accomplishments that the NBA under the administration of Past President, Mr. Olumide Akpata appointed Tobenna as the Chairman of the Governing Board of NBA Institute of Continuing Legal Education (NBA- ICLE), a role which Tobenna assumed naturally and has continued to excel to this day. It is on this note, and in his capacity as a former member of the NBA Lagos CLE Committee who has experienced first-hand Tobenna’s inspirational leadership style, that this writer joins other members of the NBA Lagos Branch and well meaning Nigerians in congratulating Tobenna for what is undoubtedly a well-deserved accolade.

In ending, it is pertinent to salute the leadership of the NBA Lagos Branch led by Mr. Ikechukwu Uwanna as well as the Branch’s Dinner Committee ably led by Mrs. Oyinkansola Badejo-Okusanya for the recognition given to not only Tobenna but also the rest of the awardees including Honourable Justice Bode Rhodes-Vivour (Rtd); Honourable Justice Rahman Oshodi; Mr AyotundeAkintunde, SAN etc.

While Tobenna’s pioneering and inspirational work at the national level of the NBA has been getting the plaudits that it rightly deserves, the fact that this particular award came from his own home should make it all the moreremarkable, because once in a while, a Prophet is honoured in his own town and in his own home.

Orji A. Uka is a Lagos based legal practitioner.