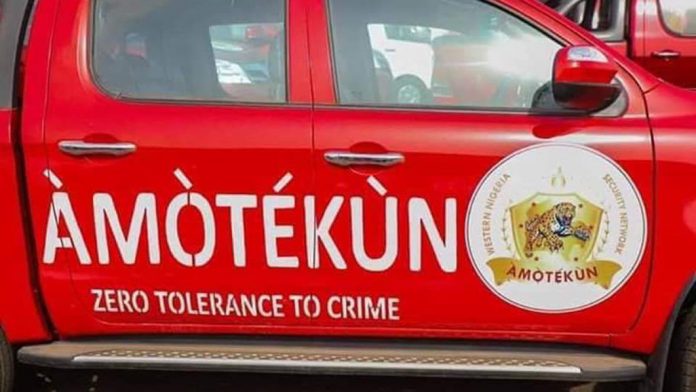 The Ogun State Amotekun Corps has nabbed one Ibrahim Ismaila for allegedly having sexual intercourse with a goat.

The 18-year-old Ismaila was arrested in Ilu-Tuntun Olorunsogo, Ajowa, in Ifo Local Government Area of the state.

The state commander of Amotekun, David Akinremi, who disclosed this on Tuesday said, the teenager’s arrest followed the alarm raised by one Jimoh Opeyemi, who saw Ismaila while committing the act of bestiality.

The said Jimoh Opeyemi, an iron bender was going to a construction site when he sighted the suspect sleeping with a she-goat.

Akinremi said Opeyemi raised the alarm, attracting people around the area including an operative of Amotekun Corps, who got the suspect arrested.

Also, the corps hinted that it arrested one Raimi Yusuf for reportedly impersonating an official of the Ibadan Electricity Distribution Company (IBEDC).

Yusuf was said to have defrauded some people of the sum of N1.5 million.

Arrested in Ijebu-Ode, said the suspect claimed to be an employee of IBEDC, promising one Olufeyisan Oluwaseun and four others the facilitation of electric poles and metres from the electricity distribution company.