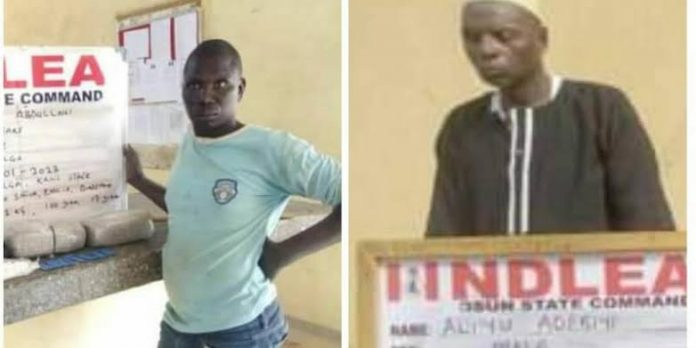 A 67-year-old blind grandpa, a leper and one other have been apprehended by the National Drug Law Enforcement Agency, NDLEA, for drug trafficking.

Spokesperson of the agency, Femi Babafemi, in a statement on Sunday, January 22, 2023, said the blind suspect,  Aliyu Adebiyi, was arrested in Osun State.

“In Osun state, NDLEA officers on Friday 20th Jan. took into custody a blind 67-year-old grandpa, Aliyu Adebiyi, in whose house they found 234 kilograms of cannabis at Sokoto village, Owena Ijesa, Atakumosa East LGA. In his statement, he said a drug dealer kept the consignment with him for a fee of N6,000 per month and paid for three months upfront,” the statement read.

The 45-year-old leper, Haruna Abdullahi, who is notorious for drug dealing, was arrested at Garko town, Kano on Thursday 19th Jan. while 2.2kgs of cannabis and various quantities of Diazepam and Exol were recovered from him.

No less than 370kgs of cannabis were recovered from a sawmill at Ilale, Owo in Ondo State when operatives stormed the industrial plant following credible intelligence.

In Edo state, 261 kilograms of the illicit substance were seized from a suspect, Uche Monday at Uneme-Osu, Ososo Road in Akoko Edo area of the state with another 74kgs evacuated from a bush at Okpela fertiliser community in Etsako East LGA.

In Abuja, NDLEA operatives on Monday 16th January raided Lugbe area of the FCT based on credible intelligence that a dealer was operating in a batcher on the outskirt of the town. A search of the batcher led to the recovery of 42.9kgs cannabis, 15grams cocaine, 137grams Methamphetamine, and a cash of Two Million One Hundred and Forty Eight Thousand, Five Hundred Naira (N2,148,500) only, believed to be proceeds of the criminal trade.

While reacting to the seizures and arrests by the Osun, Kano, Ondo, Edo and FCT Commands in the past week, chairman of NDLEA, Brig. Gen. Mohamed Buba Marwa (Retd) commended all the officers involved in the operations and charged them and their compatriots across the country to remain steadfast and focused on winning the war against substance abuse and illicit drug trafficking in Nigeria.