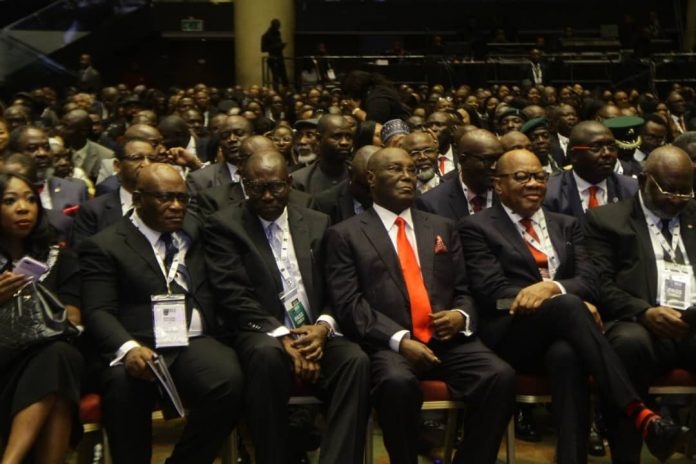 Last week, over 13,000 lawyers across the country converged in Lagos for the Annual General Conference of the Nigerian Bar Association, NBA, held at Eko Atlantic City.

The week-long event tagged: Bold Transitions, also attracted frontline presidential candidates who shared their visions on how they will run the country if elected president. In this report, Law and Human Rights examines some of the key national and justice sector challenges raised at the event and recommendations made by speakers and delegates for lasting solutions.

Nigeria’s international celebrity writer, Chimamanda Ngozi Adichie who was the keynote speaker, set the ball rolling with her eloquent soul-searching speech on the need to enthrone rule of law, justice and bold leadership in the country.

Adichie pointed out that Nigeria is in disarray and in need of heroes like the late Professor Dora Akunyili and Gani Fawehinmi who can give the country good leadership.

“Nigeria is in disarray. Things are hard and getting harder by the day. We can’t be safe when there is no rule of law. Nigerians are starved of heroes to look up to.

“Late Dora Akunyili and Gani Fawehinmi were heroes that Nigerians looked up to before now. Unfortunately, that era has gone. I believe that NBA is in a position to give the nation heroes that we can look up to, to lead the nation.

“As long as we refuse to untangle the knot of injustice, peace cannot thrive. If we don’t talk about it, we fail to hold leaders accountable and we turn what should be transparent systems into ugly opaque cults.

“My experience made me think there’s something dead in us, in our society; a death of self-awareness and ability for self-criticism.

There’s a need for resurrection. We cannot avoid self-criticism but criticize the government. We cannot hide our institutional failure while demanding transparency from the government,” she stated.

Adichie further advocated for an uncorrupted judicial system and called on the NBA to leverage technology in the judicial process and the administration of justice in the country. She said: “Nigerians are disillusioned because they know of the decline of professionalism in some sections of the legal profession. As the NBA continues to fight the abuse of power, it must also look inward not to be corrupted.

In his short presentation, Atiku said that his priority would be to unite Nigerians to fight insecurity which has become a major setback to the unity of the country.

He said: “Since the return of democracy, Nigeria has never been in such a critical situation as we find ourselves now. The problem of poverty, insecurity, unemployment, etc is enormous but what is important is how to tackle them.

“When PDP came into power in 1999, despite winning overwhelmingly across the country, we decided to include members of other parties in our leadership. That singular action united the country and resulted in calm. I believe we can have that experience again. It is only when we have a sense of belonging that we can deal with insecurity.

On his part, Shettima, who represented Bola Tinubu at the conference, said his principal will replicate the wonders in Lagos and Borno states, if elected president.

The former governor of Borno State disclosed that he built some of the best schools in the state during his tenure, adding that Tinubu’s administration will address issues of the economy and security, among others.

He said: “Nigerians have the capability to see through the worn-out rhetoric and sophistry of pretentious politicians. Nigerians should follow the man that knows the road. From day one, we will hit the ground running. We’ll promptly address the issue of the economy, ecology and security.

“We have the antecedents. I built some of the best schools in Nigeria. Go to Borno and see wonders; you will never believe that it is a state in a state of war.

“So, we are going to replicate our achievements in Lagos, in Borno and some of the frontline states so that our nation will be a better place. The fundamental issue is pure leadership.”

In his presentation, Mr. Peter Obi said the 2023 election will not be about religion or tribe but character and competence in leadership.

He said: “Nigeria is in a mess. We got here simply because of the cumulative effect of bad leadership. The coming election is not about tribe or religion but about character and competence. We need a bold transition from a highly insecure state to a highly secure state.”

Obi also stated that his approach to tackle the worsening exchange rate problem in the country will be to encourage manufacturing and export of goods and services.

In his speech, Justice Ariwoola, who was represented by the Chief Judge of Lagos State, Justice Kazeem Alogba, said the bar and bench must return to the days the ethics of the legal profession was upheld and enforced, saying there couldn’t be peace in Nigeria without justice.

He said the justice sector was very important to the survival of Nigeria, stressing that all stakeholders must ensure it was protected and improved upon, so it could continue to provide hope for the masses.

On his part, Governor Sanwo-Olu said the state’s judicial system had upheld the legacies of past administrations in the improvement of the legal practice in the country.

The governor, who was represented by the state’s Attorney-General, Moyosore Onigbanjo, stated: “We have continually transformed our structures, building new courtrooms, renovating existing ones to create a more conducive environment for our judges and to efficiently administer justice.

“I can boldly say that no state takes the funding of judiciary as serious as Lagos State, and this is a legacy that has been sustained by successive administrations since 1999.’’

Speaking on a plenary session titled: Lack Of Consistency in Judicial Pronouncement In Nigeria; Code Of Conduct To The Rescue, moderated by Jean Chiazor Anishere, SAN; Court of Appeal judge, Justice Ebiowei Tobi said lawyers were also complicit in corrupting the judiciary.

He said: “Not all clients have the audacity to approach a judge to influence his case; they have facilitators and these facilitators are lawyers; yet, same lawyers are complaining that judges are corrupt when you are involved in forum shopping.

“It is my earnest plea that lawyers do their work and allow the judges do theirs. It is most likely that a lawyer who wins all his cases in court, influences its outcome. If as a lawyer in 10 years of practice you win all your cases, then you are a suspect.”

Owasanoye spoke as a discussant on the topic: How corruption fuels Insecurity and Bad Governance : The Role of Lawyers in Tackling Corrupt Practices in Nigeria, said lawyers act as middlemen for suspects in most money laundering and corruption cases.

Citing a case under investigation where the money involved was traced to the account of a lawyer, Prof Owasanoye said: “When we got to the account, the looted money has been further transferred to so many accounts in an effort to frustrate investigation.”

In the case of courts, the ICPC Chairman said the courts are in the habit of issuing orders stopping anti-corruption agencies from investigation and making arrests.

“The biggest culprits are senior lawyers and it is a matter of regret that the NBA is not doing anything about it,” he said.

Mr. Falana urged judges to learn to manage cases, saying the procedure where cases of senior lawyers are heard first must stop.

“Our judges must learn to manage their courts if we must ensure speedy dispensation of cases.

I see no reason why the provision in the Legal Practitioners Act that allows cases of senior lawyers to be heard first in court must continue. We must stop it and adopt more efficient ways of freeing the court docket.”

In his contribution, Chief Ozekhome said that the judiciary was in a quagmire. He said: “Judges are afraid to deliver fair judgments because the government is on their neck. This is because the executive dictates the pulse and the judiciary is hopeless.

The judiciary itself, particularly judges, put manacles on their feet where none exist. They want to obey the executive even when the executive is saying don’t obey me.

“They forget that judgment must be respected. They deny litigants who are judgment-creditors the fruits of their labour.”

He questioned why a judgment creditor must go through the Attorney-General to enforce it. To him, this factor is one of the consequences of undermining the judiciary under the country’s democracy. Otteh identified overcrowded dockets and escalating costs of filing cases as major barriers to justice access. He believes the courts are not responsive enough to the need for more access.

“We are still paper-driven, which is labour-intensive and we are not prepared enough for another pandemic,” he said.

“Our judges fail to exercise the courage they need to display when they face challenges like impunity from the state. If the judiciary cannot faithfully exercise their authority, it will be undermined.”

Speaking at the plenary session titled: Energy Transitions, Revenue Challenges For The Nigerian Federation, former presidential aspirant, Kingsley Moghalu attributed Nigerian economic problems to lack of innovation on the part of our leaders.

In his words: “Our leaders lack ideas and are more comfortable with maintaining the status quo without minding the devastating effects the status quo has on our economy.”

Moghalu outlined the factors responsible for the revenue challenges in Nigeria, which include; reliance on crude oil, incompetence and recklessness in tackling fiscal threats, oil theft which has greatly affected the GDP, fiscal and debt crisis, constitutional problems.

The highpoint of the conference was the official handing over of the NBA leadership to a new executive led by Mr. Yakubu Maikyau, SAN.

Maikyau, who was sworn in as the 31st President of the NBA, won the election held earlier in July with 38,000 electoral votes. At the swearing-in ceremony, Maikyau thanked God for bringing him thus far.

He also thanked his colleagues at YC Maikyau & Co., his campaign team, as well as friends and associates who supported his candidacy.

He extended a hand of fellowship to all those who contested the office of the NBA President with him, saying he and his team would be coming to tap from their indepth knowledge from time to time.

“I saw all your great manifestos and your laudable proposals for the NBA. What has happened is that we are now the ones who have been given the responsibility. I invite you all to join hands with us as we build the Nigerian Bar Association to that great heights we all desire,” he said.

The event was mostly successful save for the shameful act of some lawyers who looted one of the conference centres and carted away conference materials and phones.

The NBA leadership described the incident as shameful and promised that all lawyers involved in the act will be punished.