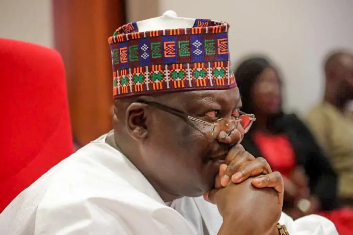 Senate President Ahmad Lawan, on Monday, lamented that the National Assembly is incapacitated in the fight against corruption and waste of public resources because the 1999 Constitution did not give the parliament the needed legislative power to do so.

He said this while responding to a lecture delivered by a former Speaker of the House of Representatives, Demeji Bankole, during the 6th convocation ceremony of the National Institute for Legislative and Democratic Studies-University of Benin (NILDS-UNIBEN) held at the National Assembly, Abuja.

Bankole delivered his lecture on the theme: “Challenges of legislative turnover: Implications for good governance in Nigeria”.

Lawan said though, Section 88 of the 1999 constitution as amended provides that the parliament shall expose corruption, embezzlement and wastes, but did not equip the parliament with the power of sanctions.

“I think the reality is that the constitution of the Federal Republic of Nigeria (1999 as amended) as it is today has left the legislature constrained because, in Section 88 , it talks of the legislature exposing corruption, wastes and embezzlement and stops there. So, when you expose something and you can’t do anything, how does that solve the problem? It’s like seeing a thief and you say “thief, thief! thief! ole! ole! and you can’t act as a police person to arrest this person and cannot try or prosecute this person and the person goes.

“So, the legislature is really incapacitated; that is the fact because, you can’t do anything; if you sign a warrant of arrest for someone you invited and who refused to appear before the National Assembly; you have no police of your own in the National Assembly to send to go and arrest that person. You have to go through the Inspector General of Police and where does he belong?

“And the IGP will have the choice if you ask him to send the police to arrest somebody let’s say in the Ministry of Justice; he will really has to weigh the options whether he will create problem for himself or the institution by issuing that warrant”, he said.

Lawan, who also lamented the high turnover of legislatures at the National Assembly due to the manner politics is played in the country, said it will impact negatively on the development of democracy in the country.

While delivering his lecture, Bankole advocated that those elected into parliament should not simply be “loyalists of governors” or governors’ boys but people who can understand and engage with policy and other technical issues routinely presented to the legislature.

He said non-executive interference can protect legislative terms and results over a long time in institutions and capacity building.

Bankole said when power is concentrated in one arm of government, it could result in tyranny and ultimately hinder the effectiveness of other arms from holding each other to account.

Earlier, Director General of NILDS, Prof Abubakar O. Sulaiman, said the convocation ceremony was held for a total of 87 candidates who have been certified in both character and learning by the authorities of NILDS and University of Benin in the following.