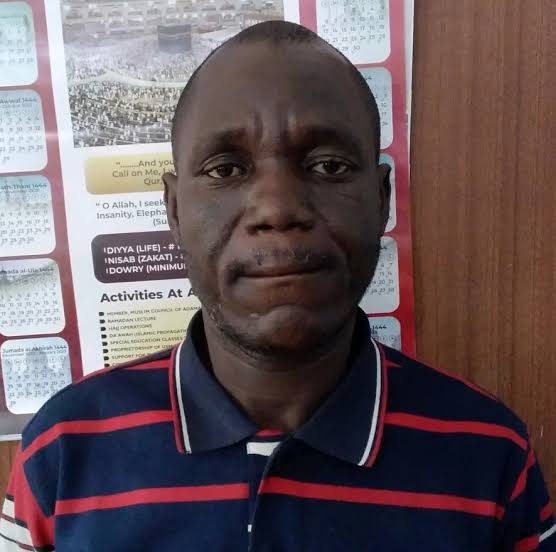 Usman Garba, a Nigerian man, has been arrested in Adamawa State.

He was arrested by the police in Adamawa State over alleged N2.5 million money-printing fraud.

The 45-year-old Garba was arrested after allegedly collecting the N2.5 million in instalments after promising to print money to the tune of N30 million for his victim, 29-year-old Gabriel Ishaku, but failing to do so.

It was gathered on Thursday that Garba, who is of Ruwan Bobo Mushiyar Mai Kaho, in Rogo Local Government Area of Kano State, perpetrated the act against Ishaku of Boka ward in Michika LGA of Adamawa State by calling him constantly to demand various sums to buy certain requirements, which amounted to the total N2.5 million over a period, for the promised N30 million.

After the two were brought together by one herbalist named Ibrahim, and they came to an agreement that Garba would print N30 million for Ishaku, Garba started to ask for money to buy certain requirements, assuring that demons had agreed to print the money.

He said the demons required monkeys, foxes, goats, dogs and cattle, among other animals, to arrange the printing.

It has been established that as Ishaku kept sending money to Garba in instalments, he was using it to feed his two wives and eight children.

Ishaku, on suspecting foul play, reported the matter to the police in Michika on April 15, 2022, which led to the eventual arrest of Garba in his home town, Kano.

The Police Public Relations Officer in Adamawa State, SP Suleiman Nguroje, who confirmed the matter on Thursday, said Ishaku had alleged that Garba started threatening him when he (Ishaku) stopped sending money to him.

On his part, Garba admitted duping Ishaku but said that the money Ishaku sent to him was N700,000 and not N2.5 million, and that he did not threaten Ishaku.