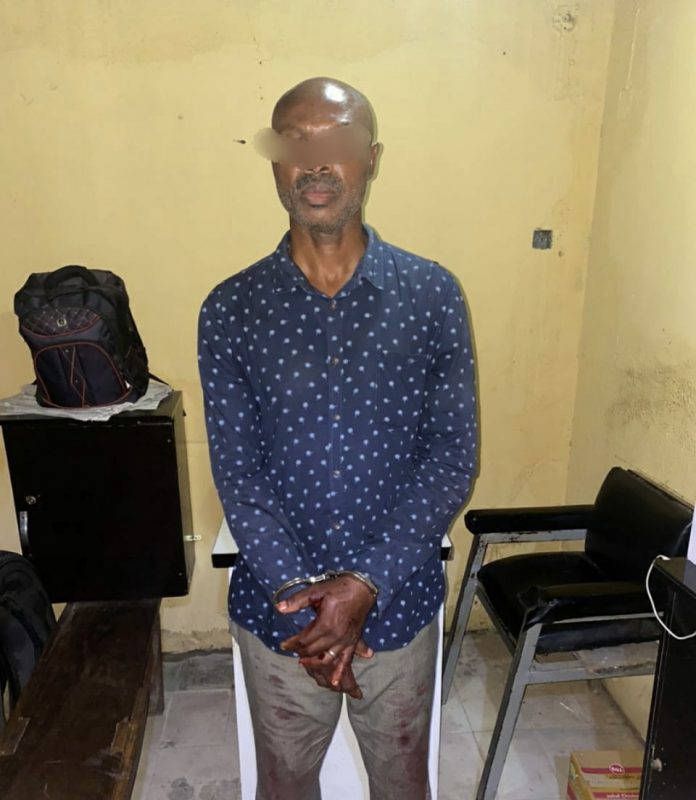 A 49-year-old man, Lawrence Itape, has been arrested for allegedly stabbing his wife, Rebecca, to death during an argument over water to take his bath, in their apartment at Seaside Estate, Badore, Ajah area of Lagos.

The father of two, as gathered, returned home from work Monday night to discover there was no water for him to take his bath.

He was said to have scolded his wife on why she did not buy water in the empty jerricans at home as residents of the area are used to buying water from designated boreholes in the community.

Edo State-born Itape reportedly ordered his wife to accompany him to buy water in three jerricans, for him to bathe and drink.

However, on the way, his wife was said to have diverted to buy some batteries for their wall clock that had stopped working. Her action stirred up another round of argument as her husband accused her of always buying the wrong battery.

Itape, according to eyewitnesses, said both of them had agreed that she should not buy batteries for their wall clock again, as she was always buying the wrong ones.

Explaining, Itape said: “During the quarrel, she abused my parents, which was a regular thing whenever we quarrelled.

“When we got home, she continued abusing me.  I climbed upstairs, and she followed me, cursing me. When I came down the stairs, she still followed me. I got angry.“

In the ensuing quarrel, Itape was said to have made for the kitchen knife and stabbed his 47-year-old Delta State-born wife in the neck, thereby leading to her death.

Their two children, ages seven and 10, were said to have cried to their neighbours for help when the fight was ongoing. One of the deceased’s cousins, who gave her name simply as Rita, said there were multiple piercings on the corpse.

Spokesman for the Lagos State Police Command, SP Benjamin Hudenyin, who confirmed the incident, said it occurred at about 11.30 pm on Monday.

He said: “A team of detectives led by the Divisional Police Officer in charge of Lagbansa division, CSP Stephen Abolarin, moved to the scene and effected the arrest of Lawrence Itape. The knife was recovered and the corpse was deposited at the Mainland General Hospital mortuary, Yaba for autopsy and reservation.

“The suspect has been transferred to the State Criminal and Intelligence Department, SCIID, Yaba, Lagos for discreet investigation “.