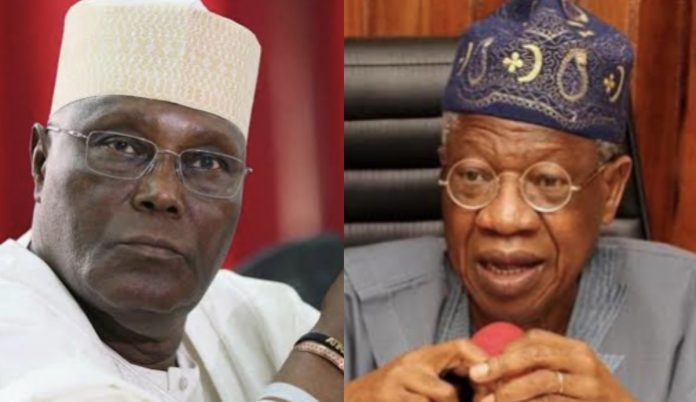 The federal government has described as unfortunate the pledge by former Vice President Atiku Abubakar to reopen all Nigerian borders if elected president.

Mr Abubakar, the presidential candidate of the Peoples Democratic Party (PDP), had made the pledge during his campaign rally in Katsina on Tuesday.

But the Minister of Information and Culture, Lai Mohammed, said Mr Abubakar in his desperation for power would not hesitate to return Nigeria to the era of unbridled inflow of weapons and massive importation of food to the detriment of local farmers.

The minister spoke on Thursday in Abuja at the 15th edition of the President Muhammadu Buhari (PMB) Administration Scorecard Series.

The scorecard initiative, which was launched as part of efforts to showcase the achievements of the Buhari administration, had as guest the Minister of Police Affairs, Mohammed  Dingyadi.

According to the minister, Abubakar’s pledge, if implemented, would put millions of Nigerians out of job as well as ruin the fertiliser companies and the rice mills that had grown exponentially in number since Nigeria shut its land borders in 2019.

He added that the planned policy by Mr Abubakar would worsen the security situation in Nigeria by throwing open all the borders and allowing  massive inflow of small arms and light weapons into the country.

Mr Mohammed said by the statement, Mr Abubakar had informed Nigerians that he would reverse all the efforts made by the Buhari administration to achieve self-sufficiency in the production of many staples, especially rice.

He added that the millions of rice farmers would lose their jobs when imported rice floods the country while hundreds of thousands of Nigerians working in the various rice mills established under the Buhari administration would also be jobless.

“By that statement, Alhaji Atiku will shut down most, if not all, of our new fertiliser blending companies, with thousands of jobs going down the drain.

“Also, by his declaration, the former vice president has told Nigerians that he will worsen security in the country by allowing arms and ammunition to flow in unhindered into the country,” he said.

He also disclosed that 10 large scale integrated rice mills were currently being built across the country.

“His Excellency, Atiku Abubakar, may also want to know that while Nigeria was the number one export destination for rice in 2014, our country has now moved to number 79, according to Thai Authorities.

“By throwing open the borders indiscriminately as he has pledged, Alhaji Atiku Abubakar has simply announced that he intends to return Nigeria to the number one importer of Thai rice in 2023!

“For sheer expediency, Alhaji Atiku, a former Customs Officer who rose to the pinnacle of his career, is ready to erase the gains made since 2015 in pushing Nigeria closer to self-sufficiency in the production of staples,” he said.

Mr Mohammed warned that the promise by Atiku was a red flag to Nigerians who, in line with the admonition of the president, had been striving to” produce what they eat and eat what they produce.”