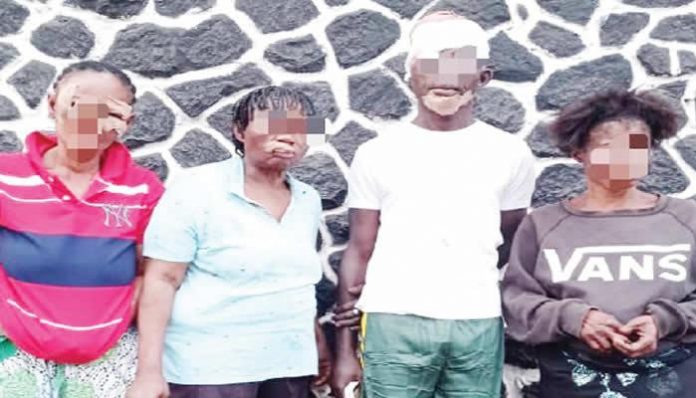 The Lagos State Police Command has confirmed the arrest of four suspects for allegedly attempting to kidnap a 10-year-old girl in the state.

The state Police Public Relations Officer, SP Benjamin Hundeyin, who confirmed the development in a tweet, said the suspects were rescued from being lynched by an angry mob, who caught them perpetrating the crime.

He said, “These four elderly people allegedly attempted to kidnap a 10-year-old girl. People around apprehended them and beat them black and blue. The police arrived on time. Investigation is ongoing. Stop jungle justice! Report crime and criminals to the police.”

In another development, the PPRO said two persons were rescued from being lynched by an angry mob who descended on them for allegedly possessing the corpse of a child in the Oshodi area of Lagos State.

It was gathered that the child fell ill at midnight and died before his family members could rush him to a hospital for treatment.

Following the child’s death, his family members decided to convey his corpse to their hometown in Ikwo village, Ebonyi State, for burial.

The family members, consisting of the deceased’s father and a yet-to-be-identified relative, while carrying the corpse went to a terminal in Oshodi to purchase bus tickets for the journey.

Passersby, who observed that one of them was carrying a dead child, raised the alarm and descended on them.

Some people were said to have alerted the Makonde Police Station, from where policemen were detailed to intervene in the matter.

The policemen reportedly rescued the two men and during investigation, it was revealed that the deceased child was sired by one of the assaulted victims.

It was learnt that the deceased’s mother, who was at their residence in the state, was also contacted and she corroborated the claims of her husband.

The state Police Public Relations Officer, SP Benjamin Hundeyin, who confirmed the incident, said the corpse had been deposited in a mortuary.

He said, “The incident happened on September 25, 2022. We heard that they were lynching somebody and we went there, protected the father and a relative from being lynched and took the corpse of the child to a mortuary.”