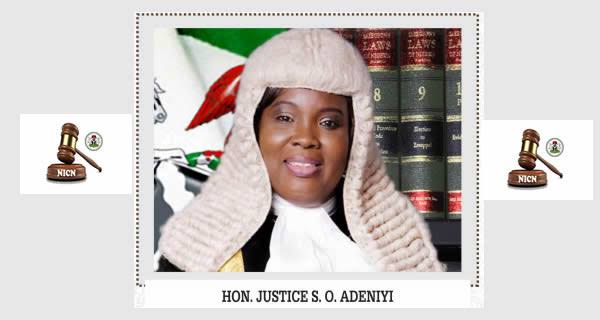 The Presiding Judge, Kaduna Judicial Division of the National Industrial Court of Nigeria, Hon. Justice Sinmisola Adeniyi has declared that the dismissal of Mr. Emmanuel Byis as the Deputy Plant Manager of the Kaduna State Water Corporation was done in breach of the terms and conditions of his employment and the Kaduna State Public Service Rules.

The Court held that contrary to the Kaduna State Public Service Rules 2005, the procedure for the dismissal of Mr. Emmanuel Byis was blatantly violated.

The Court further ordered the payment of Mr. Emmanuel’s Gratuity and pension from the date of employment 3rd November 1986 till 3rd November 2021, the date of his retirement all within 30 days.

From facts, the Claimant- Mr. Emmanuel Byis had submitted that the disciplinary procedure adopted by the Government that resulted in his dismissal was done against the Public Service Rules being a permanent and pensionable staff of grade level 12 of the Kaduna State Water Corporation.

He further contended that his unlawful dismissal by the Kaduna Government has caused him irreparable damages and all efforts to be reinstated proved abortive, urged the court to grant the reliefs sought.

In defense, the Defendants- Kaduna State Government, Kaduna State Water Corporation, and Kaduna Attorney General maintained that Mr. Emmanuel was lawfully dismissed from his employment and the disciplinary procedure as stipulated in the Kaduna State Public Service Rules was complied with for his dismissal.

The Defendants’ witness averred that Mr. Emmanuel was invited by the committee and was given the opportunity to state his role in the incident that led to his dismissal and he submitted a report, and based on the findings of the committee, a recommendation was made to the Government, and as such, he cannot claim that his dismissal was unlawful.

In opposition, the learned counsel to the claimant, J. K. Irikefe Esq. urged the Court to hold that his client was denied the right to fair hearing by the failure of the Defendants to comply with the PSR of Kaduna State and to further hold that the entire disciplinary process resulting to the purported dismissal of the Claimant is null and void and of no legal effect.

Delivering the judgment after careful evaluation of the submission of both parties, the presiding Judge, Justice Sinmisola Adeniyi held that Mr. Emmanuel cannot be validly removed from employment unless the provisions provided in the statute for removing him are followed strictly.

The Court further ruled that it is apparent from the methodology and the findings of the Committee, that the Defendants did not issue the Claimant with a query or furnish the Claimant with documentary evidence for his defence.

Justice Adeniyi stated that the delegated disciplinary powers of the Civil Service Commission donated to the Permanent Sectary and Heads of Extra-Ministerial Departments in respect of officers on Salary Grade Level 01 to Grade Level 13 do not include the power of dismissal.

“It is clear by the evidence on record that the Claimant was on Grade 12 before he was dismissed. Therefore, by virtue of Rule 04103, the 2nd Defendant acted ultra vires his powers by dismissing the Claimant and thereby unlawful.” Court ruled.