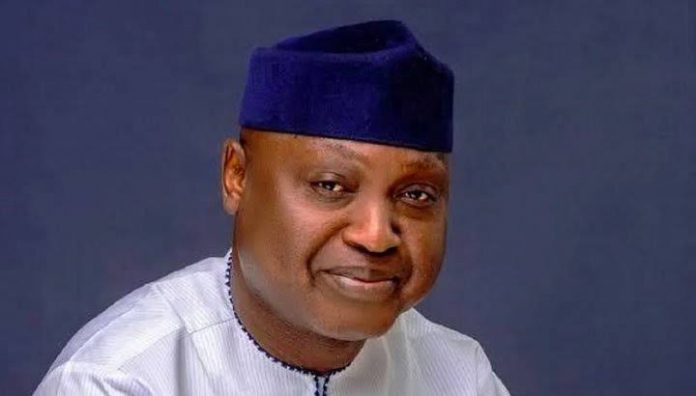 Jubilation rented the air, as the Ekiti kete pavilion, was, yesterday, jam-packed and spilled over to the adjourning streets as Governor Biodun Oyebanji took over the mantle of leadership in the state.

Vehicles parked on the road leading to the pavilion obstructed traffic in the area for several hours, and motorists had to take a detour to the old Iyin road.

Jubilant crowds in different ‘aso-ebi’ uniform from different towns of the state as well as visitors that thronged the Ado-Ekiti from neighbouring states to witness the inauguration of Governor Oyebanji occupied all the available seats in the pavilion and the main bowl was not left out as they struggled with police for space.

While addressing the people shortly after his inauguration, Governor Oyebanji, promised to run all-inclusive governance that would make Ekiti a land where prosperity, abundance, unity and equity will thrive and blossom.

Oyebanji polled a total of 187, 057 to defeat his closest rival,  Segun Oni and candidate of the Social Democratic Party, SDP, who polled 82, 459 votes, in the highly pulsating and keenly contested June 18 poll.

The inauguration was attended by the Presidential candidate of the All Progressives Congress, APC, Bola Tinubu and many governors, among other notable Nigerians.

First to take the oaths of office and allegiance, was the Deputy Governor, Mrs Monisade Afuye and  followed by Oyebanji, who was accompanied by his wife, Dr Yemisi Oyebanji.

The oaths were administered by the Chief Judge of Ekiti State, Justice John Adeyeye, among other judicial officers.

Amidst the loud ovation, Oyebanji sauntered into the arena of the swearing-in held at the palatial Ekiti State Pavillion along new Iyin road around 12.08 pm and went around while being cheered.

Addressing the crowd after the Guard of Parade, Oyebanji eulogised those who had led the state before him in various capacities, saying they must have done that under different political parties.

His words: “Today (Yesterday) is a great day for us, and we should all be proud. Today, we are observing history being made, and a new chapter of our story is written.

“It was in this spirit of oneness that they bound together as a united Ekiti confederacy and emerged victorious against external forces that sought to subjugate us in our land. In the unity of purpose, they fought and contained attempts to dominate us at different epochs in our history.

“This same spirit of unity has been passed down generations, and guided the founding fathers and mothers who built on efforts made since the Second Republic, and led the successful struggle for the creation of our own Ekiti State. This was a struggle led by our revered traditional rulers and prominent citizens which resulted in Ekiti becoming the only entirely homogeneous state in Nigeria.

“My vision is for Ekiti State to be a land of prosperity, opportunity, peace and progress. A land in which transformed people and communities can reap the fruits of their labour in dignity, good health and safety. A land of honour where integrity matters. For this vision to be actualised we need to focus on a roadmap to get there.

“I assure you that by God’s grace and the support of our people, together with you, we will keep Ekiti working.”