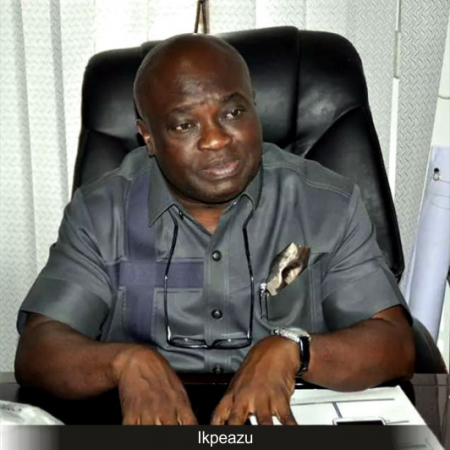 Abia State Governor Okezie Ikpeazu said yesterday he is unaware of the whereabouts of leader of Indigenous People of Biafra Nnamdi Kanu.

Kanu is scheduled to appear in court tomorrow for his case but he has not been seen since September 24 when military men entered his compound. In Afaraukwu, Umuahia.

Members of his outlawed organization are claiming that the military too him away a claim that has been denied.

Former Abia State Governor Orji Uzor Kalu, said he was reliably told that Kanu had eloped to London through Malaysia.

Speaking to reporters in Abuja at the weekend, Ikpeazu said:  “I don’t think that is a fair question. I don’t have the capacity to determine where Kanu is. I have never visited him. I have never called him on phone and he has never taken me into confidence as to what he does, where he goes. So, those who are close to him would answer. I don’t have capacity to monitor him to know where he is, maybe journalists, through investigative journalism will know.

According to him, this feeling of distrust was unfounded, stressing that the Igbo have sufficiently demonstrated love and faith in the corporate existence of Nigeria more than any other ethnic group.

Tracing the roots of the pervasive misgivings towards the South East to the civil war experiences, Ikpeazu said the Igbo have since put the nasty experiences behind them by registering their presence in every part of the country.

“The post war experience is that everybody started receding and then we started moving everywhere. Then at the end of the day, our people are beginning to feel that we are not being trusted enough with certain strategic positions despite the fact that we have demonstrated in particular times that we love Nigeria more than anybody, we have faith in this country more than anybody,” the governor said.

Ikpeazu said the agitations are mainly fueled by inequalities and feelings of unfair treatments.

The governor said, “Fundamentally speaking, I think that if the questions we ask in this country today are whether there are inequalities, there are gaps, there are people who don’t feel that they have been fairly treated, either as an individual or as a family or as a geopolitical zone, the answer is yes.

“But if you go to Kano, you don’t count three hotels before you count that of somebody from the South East. What it means is that we are the people that have demonstrated faith in a united Nigeria”.

He traced the creation of IPOB to bottled up discontents among a section of the youths in the Southeast.

Ikpeazu revealed that Igbo political and cultural leaders had to intervene at this point and that they engaged Kanu through the Ohanaeze and the South East governors.

This, according to him, was for the purposes of exploring alternative approach to the agitation through intellectual presentations with the view to confronting the Federal Government with sound arguments.“