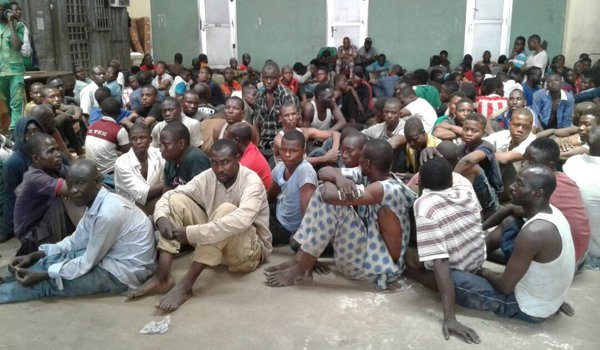 About 220 suspected criminals were arrested on Saturday in various hideouts around Lagos Island by the police, operatives of the Lagos State Environmental Sanitation and Special Offences (Enforcement) Unit  (Task Force) and other security outfits.

The joint mid-night operations tagged ‘Mother of all Raids’ was led by an Assistant Commissioner of Police, Area ‘A’ Command (Lion Building), Olushola Akinyede.

Other formations included in the operations were the Special Anti-Robbery Squad (SARS), the Rapid Response Squad (RRS) and all Divisional Police Officers (DPOs) in Area ‘A’ command Lagos Island.

The task force quoted a suspect, Ibrahim Oluwole, to have said he was arrested under the Obalende fly-over at mid-night.

He allegedly confessed to belonging to a criminal gang that dispossess people of their valuables, such as phones, wallets and jewellery at night around Obalende.

Oluwole, 27, who hails from Sagamu area of Ogun State appealed for leniency, promising to turn a leaf.