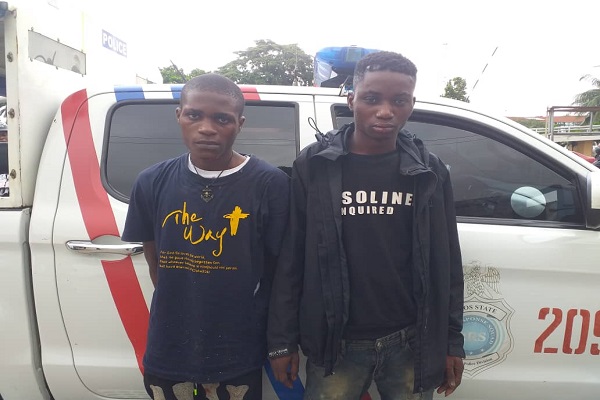 A motorcyclist arrested by the police for alleged traffic robbery has confessed to receiving N50,0000 for each operation.

Segun Oye, 18, was arrested by operatives of the Rapid Response Squad (RRS) around 5am at the weekend at Ikate Roundabout, Lekki, Lagos alongside his alleged accomplice, Ikechukwu Ubani, 19.

The Nation gathered that the Oye alias Assignment, was apprehended after a motorist they attacked in traffic knocked him down.

According to the motorcyclist, he usually transported robbers from Ibadan, Oyo State to Ajah or Ikate for operation and back for N50,000.He said Ubani engaged him to ride him from Costain to Ajah and Ikate to rob early morning and late night motorists, adding that he met Ubani around July.

Ubani admitted to have engaged Oye seven times, adding that they had successfully dispossessed the victim of his valuable and were about to flee when he used his vehicle to hit the motorcycle.The suspect who said he was an ex-convict, claimed to have been jailed for pickpocketing but graduated to traffic robbery after his release from prison.

Both suspects were charged before the Lagos State Mobile Court on Friday and each sentenced to 12 months in prison.

Police in Lagos State said yesterday that they were clamping down on cultists in Ikorodu and other parts of the state.

Spokesman Adekunle Ajisebutu said this in reaction to allegation of police illegal detention of some students of Lagos State Polytechnic, Ikorodu Campus, over alleged cultism.

He told the News Agency of Nigeria (NAN) that the allegation against the police was baseless and unfounded.

“The clampdown is in the interest of public peace following recent activities of cultists in the area.

“The Commissioner of Police, CP Hakeem Odumosu, in his determination to rid the state of cultists and other criminals, directed regular raids of hideouts used by cultists, some of who are students.

“Some students have been arrested for cult-related activities in Ikorodu, investigated and charged to court.

“Some are still being investigated. However, those not found culpable are released immediately without paying a dime,” he said.

The spokesman pointed out that there was also a regular check on police cells across the state, stressing that no suspect was detained for days in the cell anywhere.

NAN had earlier gathered that police in Ikorodu allegedly arrested and detained some young men, including some who claimed to be students of Lagos State Polytechnic, Ikorodu, over alleged cultism.

NAN further learnt that each suspect who paid between N50,000 and N100,000 to the police was released, while those who could not pay were further detained.

A source alleged that one of the detained suspects arrested at Sabo Bus Stop, Ikorodu, was able to reach his brother serving in the Nigerian Army and the family lawyer.

He was released when the police could not provide evidence of his connection to cultism, the source said.