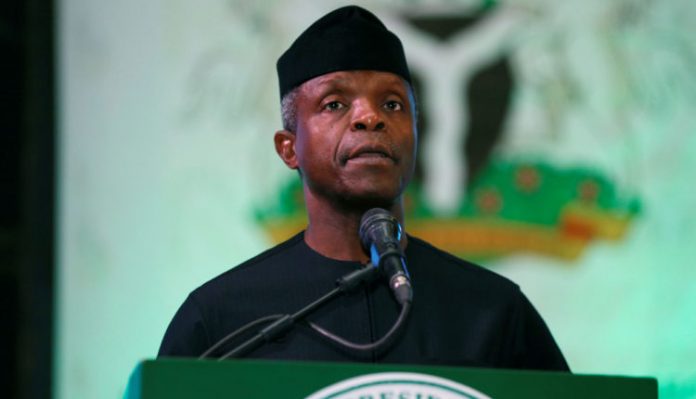 Vice President Yemi Osinbajo has called for collaborative efforts of all stakeholders in the fight against human trafficking and migration.

The Vice President made the call on Monday in Abuja at the grand finale of the 2022 UN Day Against Human Trafficking.

Represented by Mr Adéọlá Ipaye, Deputy Chief of Staff to the President, Office of the Vice President, stated that it was only by working together that the war against human trafficking could be won.

According to him, human trafficking is a global phenomenon, while encouraging everybody to rekindle their commitment so that the fight against the menace can be won.

He said that President Buhari administration had continue to deploy political will in the fight against human trafficking, saying that the drive would continue in that direction.

Osinbajo congratulated NAPTIP for the progress it had made in the fight and other stakeholders for the support they had given the agency for the feat it had achieved.

He said that policy document would continue to set agenda and reversal of human trafficking in order to ensure safety of Nigeria in the Federal Government standard procedure.

“All organisations offering shelters and homes to trafficked persons must ensure people are not exploited, we will continue to scale our efforts in the areas of protection, prosecution and others.

“We can only win this fight by working together with common vision,” Osinbajo stressed.

Earlier, the Director General of NAPTIP, Dr Fatima Waziri-Azi, said that the agency had recently commenced a nationwide establishment of trafficking in persons and violence against persons vanguard across the one 110 Federal Government Colleges.

She said that the vanguard was intended to increase the capacity of students to identify and report incidents of human trafficking and Sexual and Gender-Based Violence, in and outside schools.

She stated that the idea was to raise a generation of young people empowered to advocate against these crimes and promote safe migration as an option rather than irregular migration.

According to her, we can do a lot of prevention work just by opening their eyes to the problem.

Waziri-Azi said that the theme for the 2022 UN Day Against Human Trafficking “Use and Abuse of Technology” which featured debate for and against between Baze University, Abuja and Veritas University, Abuja, was timely.

According to her, traffickers are misusing technology to drive their agenda in trafficking many young Nigerians, saying that, there is need to change the narrative.

“Human traffickers now operate online as much as they operate offline. If the COVID-19 pandemic has taught us anything, it is the re-enforcement of the need for digital channel of communication.

“Human traffickers have also caught on to this digital transformation, there is an obvious shift from physical to virtual recruitment as traffickers have kept pace with technology, becoming proficient at using the internet for their trafficking operations.

“This theme is timely, could not have come at a better time considering the fact that at NAPTIP, we are seeing an increase in fake job advertorials and fake scholarships via social media.

“Traffickers use it to recruit and cat fish unsuspecting victims,” she said.

Waziri-Azi said that NAPTIP in partnership with the US- National Center for Missing and Exploited Children (NCMEC) will enhance tracing and diligent investigation of all cases relating to online child abuse, human trafficking and other related crimes.

She said that the partnership would also help detect persons who use social media platforms to electronically distribute pornographic materials to either blackmail or exploit victims.

According to her, the agency is currently investigating its first “sextortion“ case, adding that it has set up a cybercrime task team that is dedicated to tackle online crimes.