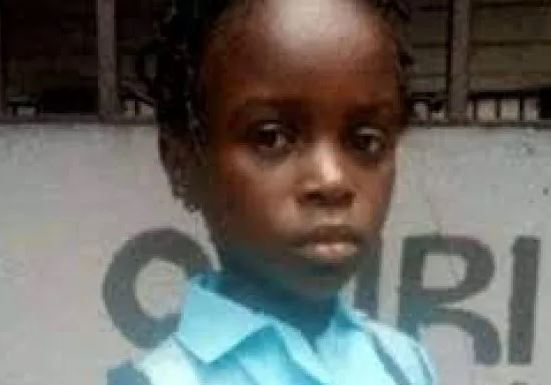 A traditional ruler in Enugu state has been arrested by the police for allegedly ordering the burning of the corpse of a 9-year-old house help identified as Precious Korshima.

The traditional ruler spent hours at the Police and was later granted bail.

Precious, before she was murdered, was a house help to Mrs Ujunwa Ugwoke of Fidelity Estate, Enugu.

Mrs Ugwuoke reportedly admitted that she beat Precious to death and later dumped her corpse along the Enugu-Portharcourt Expressway.

The Civil Rights Realisation and Advancement Network (CRRAN), through its President Olu Omotayo Esq, had in a petition to the Enugu State Commissioner of Police, quoted the father of the deceased, James Achikpi Korshima, saying the body was set ablaze by villagers.

According to Omotayo, Korshima said the Police informed him that when they went to the scene, they learnt that the traditional ruler of the community had given order to the youth to burn the decomposing body because of the offensive smell coming from it.

He also said that the traditional ruler engaged in an illegal act without informing security agents of the presence of the corpse in his domain.

Part of the petition read: “We submit that this is a clear case of murder and the investigation of the case has nothing to do with the Anti-Kidnapping Base.

“We urge you to immediately order that a thorough investigation of this heinous crime be carried out by the Homicide section of the State Criminal and Investigation Department (State CID), of the State Police Headquarters, Enugu.

“Ujunwa Ugwuoke killed the little child in a cruel and barbaric way and dumped the corpse in the bush while the traditional ruler in question completed the unlawful act by ordering the burning of the corpse.”

Korshima also appealed for justice stating that he fears he may not get justice as he has become frustrated following endless visits to the Anti Kidnapping Base for over a month.

Korshima further asked for the release of the remains of his dead child to him so that he can give the child a decent burial.