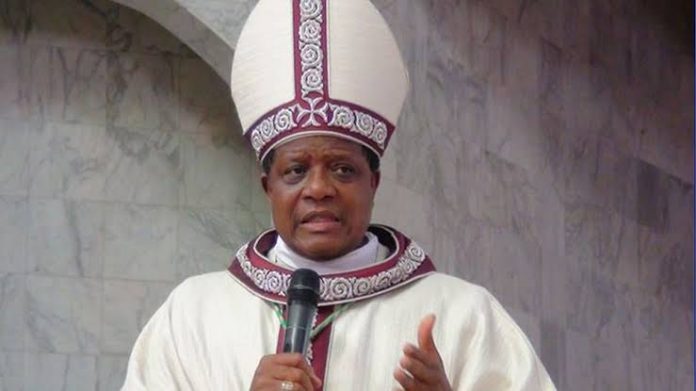 Bishop of the Catholic Diocese of Nsukka, Most Reverend Goffrey Onah, has urged couples to refrain from using social media to settle marital issues.

Mr Onah gave the admonition in a homily he delivered on Tuesday at the 80th Birthday Thanksgiving Mass of Igwe Lawrence Agubuzu, Chairman of Enugu State Traditional Rulers’ Council and his 50th Wedding Anniversary with Queen Patricia.

The mass was held at Onuigba Palace in Ezema Olo ancient Kingdom within Ezeagu Local Government Area of Enugu State.

The bishop, who themed his homily as “Link between Wisdom, Faith, Gratitude and Salvation”, said it is wrong that the showbiz industry is teaching young people that parting ways and divorce remain things acceptable in the society.

According to him, it is negative and unacceptable that the showbiz industry is portraying “divorce” and answering “ex” as something good and cherished in the society.

“Most recent couples are quick to use social media, especially Facebook and WhatsApp, to easily share their challenges in their marital homes and families, which is wrong.

“Two people living together at times have issues and it is better solved by the two people involved in terms of marriage – husband and wife – and not involving multiple third parties via the social media space.

“I charge older couples to direct young couples aright and see that they tolerate and persevere in their marriages to preserve the marriage institution as instituted by the Lord Almighty,” he said.

Bishop Onah, however, called on youths to desist from the temptation of returning to idol worship in Igbo land, adding that it was imperative that youths recognised the place of God in all they do and become.

He also urged those in authority in the South-East to redouble their efforts in tackling the spate of insecurity in the entire Igbo-land and the country in general.

On the 80th birthday of Agubuzu, the bishop thanked him for placing God first as well as pushing the frontier of Christianity and righteous living among his subjects.

“We have seen you stride and how peaceful and with the fear of God you have led this town and Enugu State. God will continue to bless you and your generation, Amen,” he added.

In a vote of thanks, Igwe Agubuzu urged the youths of his community to uphold God in all they do as well as shun all forms of idol worshipping.

“I am also thanking all people of all works of life, prominent people within and outside Enugu State as well as our traditional rulers for attending this thanksgiving mass,” Igwe Agubuzu, who was a former diplomat, said.

The mass featured a presentation of Pope Francis Apostolic Letter of Blessing on Igwe Agubuzu and his family.

The mass was conducted by Most Rev. Callistus Onaga, Bishop of Catholic Diocese of Enugu, who was represented by Most Rev. Ernest Obodo as well as many catholic priests within Enugu State.

Among those that attended the thanksgiving mass were Senator Collins Ndu; Prof. Chinedu Nebo, the former Minister of Power, and Prof. Aloysius Okolie, the Vice Chancellor of Enugu State University of Science and Technology.

Others are Igwe Joel Egwuonwu, Traditional Ruler of Umuawulu community, and other traditional rulers within Enugu State and the South-East.