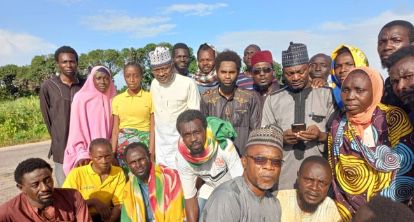 There was jubilation in the families of the remaining 23 victims of the Abuja-Kaduna train attack on Wednesday shortly after the Chief of Defence Staff, General Lucky Irabor, announced their release.

The Defence Headquarters said the nation owes the Armed Forces a debt of gratitude for achieving the feat.

The statement signed by the Secretary, Chief of Defence Staff Action Committee, Prof. Usman Yusuf, read, “I am pleased to announce to the nation and the world that at 4pm today, Wednesday, October 5, 2022, the seven-man Presidential Committee assembled by the Chief of Defence Staff, General Irabor, secured the release and took custody of all the 23 remaining passengers held hostage by Boko Haram terrorists following the attack on the Abuja to Kaduna train on March 28, 2022.

“The nation owes a debt of gratitude to the Nigerian Military under the leadership of the CDS who conceived and guided the operation from start to finish.

“All sister security agencies and the Federal Ministry of Transportation contributed immensely to this operation.”

One of the leaders of the families of the train victims, Dr Abdulfatai Jimoh, in an interview, said he was excited about the release of the remaining 23 hostages.

Jimoh thanked the Federal Government and members of the armed forces for putting smiles on the faces of the victims’ families.

He said, “Though I have not spoken to any of them, I want to believe that they have been released because we heard about it this afternoon.

“We thank God that, at last, everybody has regained his or her freedom. We are grateful to the Federal Government and the Armed Forces for all their efforts in securing the release of the reminding captives.”

The President, Major General Muhammadu Buhari (retd.), in a statement by his spokesman, Garba Shehu, expressed his happiness and satisfaction.

Buhari said the nation owed the military and all other security and intelligence agencies a debt of gratitude for the successful conduct of the operation leading to the release.

“This country’s Armed Forces are as good as any. Given needed support and encouragement as we have been doing, there is no task that they cannot accomplish. I commend them for this remarkable outcome,” the President said.