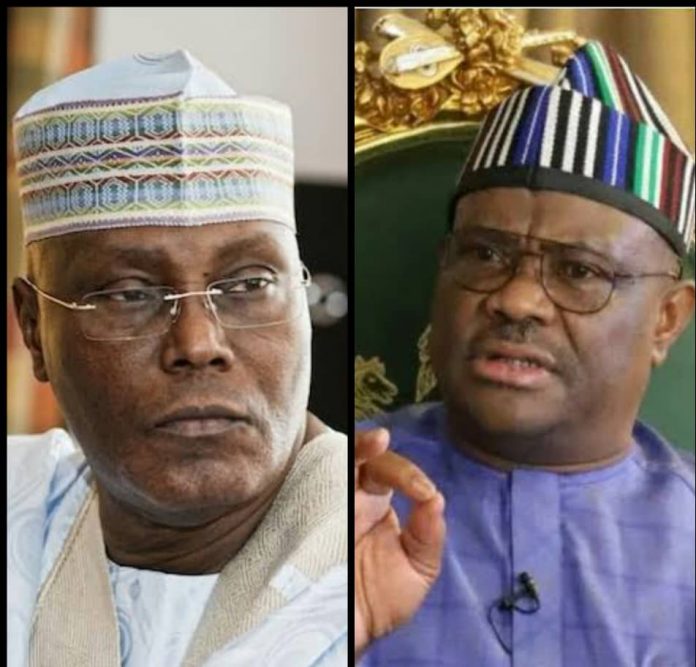 A 14-member committee constituted by the presidential candidate of the Peoples Democratic Party (PDP), Atiku Abubakar, and Rivers State Governor, Nyesom Wike, to explore the possibility of reconciliation between the two politicians will begin its work in Abuja on Monday.

Atiku and Mr Wike agreed to constitute the committee at a meeting they held last Thursday in Abuja at the residence of a former Minister of Information and National Orientation, Jerry Gana.

At the meeting last week, which was the first time they sat together since Atiku overlooked Mr Wike and appointed Delta State Governor, Ifeanyi Okowa, as vice presidential candidate, the two leaders agreed on a framework for the resolution of their differences.

They also agreed that the committee would look into the grievances of Mr Wike and the party leaders in his camp and make recommendations on how Atiku and the PDP leadership would address the issues.

There had been concerns that last week’s meeting between the two leaders failed following bellicose statements that continued to emanate from Mr Wike after the parley.

The governor had also continued his public romance with leaders of the ruling All Progressives Congress (APC), fueling speculations that he had made up his mind to defect to the APC or work for its candidate, Bola Tinubu, in next year’s presidential election.

A former senator, Lee Maeba, had also accused Mr Wike of sanctioning him and two other leaders of the PDP in Rivers – former Governor Celestine Omehia and a former Deputy Speaker of the House of Representatives, Austin Opara, allegedly for meeting with Atiku in Abuja.

It was also amidst the uncertainties that a report emerged that Mr Wike had sued Atiku, the PDP and Sokoto State Governor, Aminu Tambuwal, and asked the Federal High Court to void Atiku’s nomination and declare him the presidential candidate of the PDP in his stead.

However, at a ceremony for the opening of newly built residential quarters for members of the state House of Assembly in Port Harcourt attended by the Speaker of the House of Representatives, Femi Gbajabiamila, Mr Wike said he had no hand in the suit and accused his political opponents of mischievously attaching his name to it.

Sources said Mr Wike has not withdrawn from the reconciliation moves with Atiku, as he had named the seven representatives of his camp into the committee.

Those he appointed include former Governors Segun Mimiko of Ondo State, Donald Duke of Cross Rivers and Ibrahim Dankwambo of Gombe; a former Attorney-General of the Federation and Minister of Justice, Mohammed Adoke; and a former member of the House of Representatives, Nnena Ukeje.

From his side, Atiku named a former Senate President, David Mark; Adamawa State Governor Umaru Fintiri, a former Cross River Governor, Liyel Imoke; a former PDP governorship candidate in Ondo State, Eyitayo Jegede; and former Senator Ben Obi. Our source could not immediately recall the two other names submitted by each side.

Meanwhile, the key demand of the Wike group is the resignation of the National Chairman of the party, Iyorchia Ayu, whom it considered a biased ally of Atiku. They said Mr Ayu’s resignation is important in addressing the lopsidedness of the party’s leadership.

The group was referring to Mr Ayu, Atiku, as well as the chairman of the party’s Board of Trustees, Jibrin Wakil and the chairman of the PDP governors’ forum, Mr Tambuwal; all coming from the northern part of the country, saying the lopsidedness will make it difficult for them to campaign for the party for the presidential election.