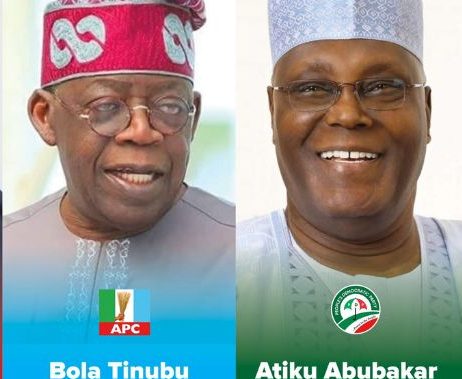 As preparations for the 2023 elections continue to heat up in Nigeria, Nigerian celebrities seem to be playing active roles in sensitising fellow citizens to decide who becomes the country’s next president.

Most celebrities who have openly declared support are divided among the trio of Peter Obi of the Labour Party (LP), Asiwaju Bola Ahmed Tinubu of the All Progressives Congress (APC) and former vice-president and presidential candidate of the Peoples Democratic Party (PDP) Atiku Abubakar.

Some of these entertainers, in a bid to sensitize and encourage fellow Nigerians to go out and get their Permanent Voter’s Card (PVC), have declared their support for a particular candidate. However, the likes of Davido, Wizkid, Burna Boy, Simi, Tiwa Savage are yet to publicly declare their support.

On July 8 after Obi announced his running mate, Peter Okoye took to Twitter, writing: “We are Fully Obidient and Yusful. God bless our incoming President(Obi) and Vice President of the Federal Republic of Nigeria. We are OBIdiently YUSful.”

A tribal war is likely to happen as it is believed that some of the celebrities from the South West have made up their mind to vote for either Atiku or Tinubu while South East for Obi.

Although some celebrities from the South-West are yet to declare the candidate of their choice, it was gathered that silent moves being made by some of them showed that they are for Tinubu.

Among the wide array of candidates from various political parties, many including prominent celebrities are rooting for Asiwaju Bola Tinubu who is the presidential candidate of the All Progressives Congress (APC).

Singer Olawale Olofooro, popularly known as Brymo, became a subject of trend on Twitter after he openly declared his support for All Progressives Congress presidential aspirant, Bola Tinubu, ahead of the 2023 election.

The singer, who described Tinubu as a “city boy” noted that the APC chieftain is the one among the presidential candidates with a plan for the country.

“Yet Tinubu is the one with a plan, we all know that. Let a city boy(Tinubu) be president for once!” Brymo responded

They were joined in June 2022 by some Nollywood stars under the League of Actors; Fausat Balogun, Jide Kosoko, Yinka Quadri, Taiwo Hassan, Faithia Williams, Femi Adebayo, Sola Kosoko, Saheed Balogun, among others in a viral video expressed their support for Tinubu.

Here’s a list of some of the celebrities who are in support of Tinubu’s candidacy; Gbenga Adeyinka, Eniola Badmus, Brymo, Jide Kosbgogo, Toyin Adegbola aka Toyin Tomato, Lateef Adedimeji, Fausat Balogun, Yinka Quadri.

It is unclear on the celebrities supporting the PDP presidential candidate, Atiku Abubakar as most are yet to publicly voice out in fear of backlash from fans. But with the election drawing closer we are certain more celebrities will join the train.

Their endorsements and campaigns had no major effect on the election as President Muhammadu Buhari defeated Goodluck Jonathan to become President.

Would that be the same fate in 2023 for Peter Obi who seems to have so much social media talk from his followers “Obidients”?

Although the election seems to have torn the creative industry apart as opinions are divided among entertainers, it is unlikely that their popularity and influence would compel voters to accept whomever they have endorsed.

Some Nigerians who spoke to DAILY POST said celebrities are becoming more money and fame conscious and they do whatever they like because they will smile to the bank following their share of the largesse given to them by the various candidates.

”Politicians’ affiliation with celebrities will not prompt me to vote for them. I know the impact celebrities have made in the country, however, many Nigerians are not in the same economic class as them. I doubt that a Nigerian suffering hardship in this country will allow prominent people who may have received cash payments to change their minds on the candidate of their choice,” Ebuka Solomon said.

A youth identified as Patience Mokwe said 2023 is a landmark election for the country and several Nigerian celebrities who have endorsed Atiku and Tinubu have not shared reasons for doing so. It is possible that if genuine reasons are given, Nigerians may support the candidates they enjoy.

Babatunde Ayoola said, ”I don’t think with the insecurity issues in this country any Nigerian will allow celebrities to endorse anyone for them. Are we not tired of everything happening in this country? People have been kidnapped in trains and while travelling. Do these celebrities use these means of transport with us? Why should people who do not understand our plight make decision for us?” he asked.